Aditya Pancholi's son Sooraj was charged with abetment to suicide after the death of his former girlfriend, actress Jiah Khan, who was found hanging in her Mumbai apartment in June 2013. Jiah's mother Rabiya Khan had accused Sooraj of murdering her. 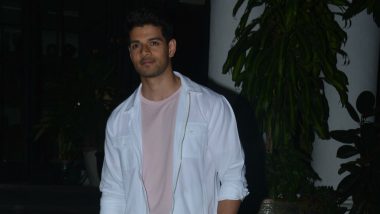 Mumbai, October 30: Actor Sooraj Pancholi, who has been accused of abetment to the suicide of Jiah Khan, blames the media for portraying him wrongfully without knowing the truth.

"Not even five per cent of what the media has written about me till date is true," claimed Sooraj, in an interview to IANS, adding: "They have heard the story only from one side. They have never heard my version, because I never claimed I am innocent to gain people's sympathy." Dim Dim Light: Sooraj Pancholi to Romance Brazilian Model Larissa Bonesi in Upcoming Music Video.

He further said: "I only want the truth to come out and the media cannot give me that. Media can't get me justice, only the court can give me that. So, I have been waiting for the court to take the decision and a lot of time has elapsed. This is my career, my bread and butter. So, I have to speak out because what is happening is wrong."

Aditya Pancholi's son Sooraj was charged with abetment to suicide after the death of his former girlfriend, actress Jiah Khan, who was found hanging in her Mumbai apartment in June 2013. Jiah's mother Rabiya Khan had accused Sooraj of murdering her.

"It has been very disturbing. Not only for me but also for my family, because if anybody puts an allegation on you it is not so easy to prove yourself innocent," he said.

"I was young. I didn't even know what was happening. I am not saying I am innocent. Say, I am the bad guy, say I am the worst guy, then why won't you turn up in court? It has been seven years. Just because you own a British passport, you think you can do anything?" he said, referring to Rabiya Khan.

Emphasising that he wants the trial to happen, the actor said: "You are not only ruining one person's life, you are ruining a family. This is very unfair. I pray to God that this ends soon because I don't have the time to sit and wait. In the history of India, I am the only person who has said that please run my trial. Nobody, no accused ever says that. The court is also ready but my trial hasn't started yet"

Sooraj Pancholi made his Bollywood debut with "Hero" in 2015. He is back with his new film, the action drama "Satellite Shankar". On the gap of four years between the two films, the actor says he was waiting for the right script. "I heard a lot of scripts after 'Hero' but did not get that wow feel. It was more of a package comprising four songs, four action sequences etc. I did not want to do that because I was looking for a story in a real kind of space. Then, of course, I had personal difficulties in life. So, I put a hold to my career because I had to sort things out. I think good things take time, and now I am here."

On what made him select "Satellite Shankar" as his comeback film, he said: "When I heard the script, I was like wow, this is the film that has been waiting for me. The director had the script for a long time. He was not getting an actor. I think God kept this script for me only. It is a nice, humble, sweet film. I wanted to always play a soldier and give back to soldiers some kind of tribute or respect." Satellite Shankar Trailer: Sooraj Pancholi’s Cheerful Soldier Unites a Nation in This Unique Story of Self-Discovery (Watch Video)

Although he plays a soldier in the film, Sooraj says it is not about war. "This film is not about fighting or putting another country down. This is only about a soldier who loves his country and his mother. He wants to see his mother but does not get the time to even hug her because he has to go back to keep his promise. For a soldier, a promise to the country is bigger than his family or anything else. That is what we have tried to show in the film. Every film shows a soldier's heroism and sacrifices -- for instance, 'Uri' and 'Border'. 'Satellite Shankar' is the first film that highlights what civilians can do for their soldiers."

"Satellite Shankar", directed by Irfan Kamal, is slated to release on November 8.

(The above story first appeared on LatestLY on Oct 30, 2019 10:52 PM IST. For more news and updates on politics, world, sports, entertainment and lifestyle, log on to our website latestly.com).