While digging up on Anupam Tripathi aka Ali from Squid Game on IMDb, we found an interesting fact. Unwittingly, Tripathi finds himself connected to Salman Khan's Bharat. 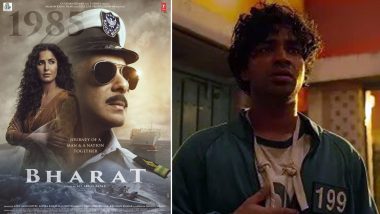 Netflix's new Korean series Squid Game has taken the world by storm. It is ranking on the top spot in several countries including India. The survival game theme has always been popular. Squid Game just brings the genre back after many years. The last one that we can remember was perhaps the Hunger Games series. Now one character from Squid Game who is creating ripples in India is Ali, played by Anupam Tripathi. After doing many bit roles in hit projects, he has finally found his breakthrough role in the show. While digging up on him on IMDb, we found an interesting fact. Unwittingly, Tripathi finds himself connected to Salman Khan's Bharat. Bharat Movie’s 'JCB Ki Khudai' Scenes Explain Why the Salman Khan and Katrina Kaif Starrer is Minting Money at the Box Office

Anupam's first appearance in front of the camera happened with a small role in Ode To My Father. He is credited as Sri Lankan man on IMDb. Now if you recall. Salman Khan's Bharat is a remake of the South Korean film. Yes, it's a long shot but there is a connection.

When Anupam was asked about his newfound success, he said in an interview, "I feel blessed. It’s good tosee my whole family feeling happy and proud. Many people were happy as if it was their job, so they have given me more strength.” Tripathi has done a lot of small roles in Descendants Of The Sun, Asura, Space Sweepers (another Netflix content),  The Eighth Night and more.

(The above story first appeared on LatestLY on Oct 08, 2021 05:41 PM IST. For more news and updates on politics, world, sports, entertainment and lifestyle, log on to our website latestly.com).