Joining angry Sushant Singh Rajput's fans is his sister Shweta Singh Kirti, who is equally shocked and livid that an 'on-duty police officer' is being confined to his quarters rather than being allowed to do his job. 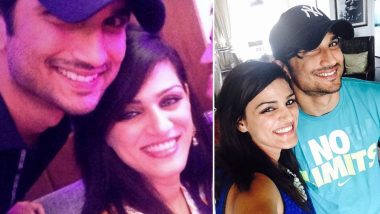 Barely a day after Bihar's top IPS Officer Vina Tiwari landed in Mumbai to headling the on-going investigation into the suicide of actor Sushant Singh Rajput, he has been 'forcefully quarantined' at the quarters he has been staying by the BMC and Mumbai Police. And while this may seem as standard procedure, given the officer flew in from another state, the fact that he has been forced to quarantine, has got SSR's fans all riled up. Sushant Singh Rajput Case: Senior IPS Officer From Bihar Sent to Mumbai on Sunday to Speed Up the Investigation.

Already under heat and being accused of doing a shoddy job so far in investigating Sushant's suicide, the Mumbai Police and BMC have now incurred the wrath of the late actor's fans. And joining them is Sushant's sister Shweta Singh Kirti, who is equally shocked and livid that an 'on-duty police officer' is being confined to his quarters rather than being allowed to do his job. Sushant Singh Rajput Case: Patna IPS Officer Vinay Tiwari Forcibly Quarantined by Municipal Authorities in Mumbai, Says Bihar DGP.

What? Is this even for real? How can an officer sent on duty be quarantined for 14 Days? #JusticeForSushant https://t.co/FRSlXcaNbY

The investigation of Sushant Singh Rajput's suicide on June 14, at his Bandra home took a new turn when SSR's father KK Singh filed an FIR in Patna against his son's girlfriend Rhea Chakraborty and her family for abetment of suicide, cheating, theft, fraud and wrongful confinement. A team of 4 police officers arrived to Mumbai immediately to investigate the matter but have still not been given full access to documents and reports that they have been demanding.

(The above story first appeared on LatestLY on Aug 03, 2020 09:15 AM IST. For more news and updates on politics, world, sports, entertainment and lifestyle, log on to our website latestly.com).