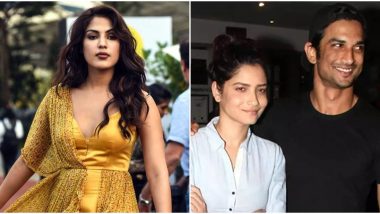 Actress Ankita Lokhande, the ex-girlfriend of Sushant Singh Rajput, made the shocking revelation on Wednesday that the late actor was quite unhappy because Rhea Chakraborty harassed him. Ankita made her claim while being interrogated by the Bihar Police team that is in the city to investigate the late actor's death. According to Ankita, Sushant had told her that he is "quite unhappy in the relationship and wants to end it as Rhea harassed him", a report in dnaindia.com has stated. A few days ago, Rhea introduced herself as Sushant's girlfriend in a social media post addressed to Home Minister Amit Shah. Sushant Singh Rajput Death Probe: Maharashtra Home Minister Anil Deshmukh Confirms the Case Won't be Transferred to CBI, Mumbai Police to Continue their Investigation.

Ankita recalled how Sushant had a long chat with her during the release of her Bollywood debut film, Manikarnika: The Queen Of Jhansi in 2019, during which he opened up on being "harassed" by his then-current girlfriend Rhea, claims the website report. The report further stated that Ankita has shared a copy of her above-mentioned chats with Sushant with the investigation team of Bihar Police.

Sushant dated Ankita, his co-star of the hit TV series Pavitra Rishta, for almost six years after which they parted ways. After Sushant's demise in June, Ankita had visited the actor's family at his Bandra residence, who were in Mumbai at that time to perform his last rites. Ankita also visited Sushant's family in Patna after that, during which she had reportedly shown the above-mentioned chats to Sushant's sister Shweta Singh Kirti. Sushant Singh Rajput Case: Mumbai Police Says Actor's Father Did Not Mention Rhea Chakraborty's Name In the Previous Statement.

On Tuesday, it came to light that Sushant's father KK Singh has filed an FIR at the Rajiv Nagar police station in Patna accusing six people, including his girlfriend Rhea, for abetment to suicide. On Wednesday, Ankita took to social media to share a cryptic post. The actress tweeted an image that reads "Truth Wins", on her verified account

(The above story first appeared on LatestLY on Jul 29, 2020 10:49 PM IST. For more news and updates on politics, world, sports, entertainment and lifestyle, log on to our website latestly.com).