Earlier Rhea Chakraborty's lawyer, Satish Maneshinde said the actor would not appear before the ED till the Supreme Court hears her plea. 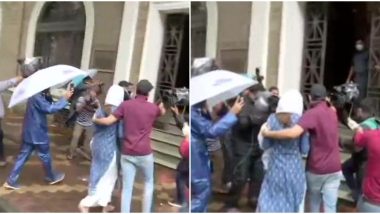 As per the new update, Rhea Chakraborty has reached the Enforcement Directorate office to record her statement. Earlier her lawyer, Satish Maneshinde said the actor would not appear before the ED till the Supreme Court hears her plea. The actress had asked ED to postpone the recording of her statement in the money laundering case filed against her. However, her attendance at the ED office meant she has agreed to record her statement, details of which will come shortly. Sushant Singh Rajput Case: Bihar Govt Tells Supreme Court That Mumbai Police Didn’t Provide Autopsy Report, CCTV Footage to Their Cops.

Rhea's case with ED was filed after Sushant Singh Rajput's father filed an FIR with Patna police accusing her of conspiracy and abetment to suicide. They also complained about Sushant's bank account having financial discrepancies. The actress had then filed a petition in the Supreme Court seeking for the case lodged by the Bihar police against her to be transferred to the Mumbai police. The plea will be heard by the apex court next week. Meanwhile, the case has been transferred to CBI and they have already filed an FIR against the actress, her family members and manager. Sushant Singh Rajput Case: Bihar Government Calls Rhea Chakraborty's Transfer Petition 'Misconceived and Not Maintainable'.

Check Out Her Pics

ED rejected her earlier request that the recording of her statement be postponed till Supreme Court hearing. pic.twitter.com/MIWYlYMXhT

The accused have been booked under various sections of the Indian Penal Code for criminal conspiracy, cheating, abetment to suicide and wrongful confinement. The agency is also probing two companies floated by Rajput, in which Rhea Chakraborty and her father Indrajit and brother Showik were joint directors.

(The above story first appeared on LatestLY on Aug 07, 2020 12:33 PM IST. For more news and updates on politics, world, sports, entertainment and lifestyle, log on to our website latestly.com).