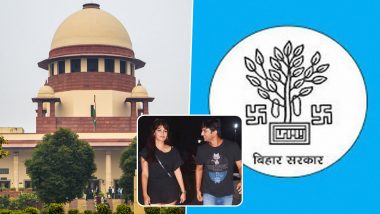 Actor Sushant Singh Rajput's shocking suicide on June 14, 2020 shocked the entire nation. What's only added to the shock was the allegations being placed on Rhea by Sushant's family. After the FIR filed on Rhea and her family by Sushant's father KK Singh in Patna, Rhea had filed a petition seeking that the investigation is moved from Patna to Mumbai, the hearing for which has been taking place in the Supreme Court. In related news, the Supreme Court has given the nod for CBI to take over the actor's death investigation from the Mumbai Police. Sushant Singh Rajput Case: Rhea Chakraborty May Skip Enforcement Directorate Summons.

And now, as per ANI reports, the Bihar Government has filed an affidavit in the Supreme Court stating that Rhea's petition seeking transfer is "misconceived and not maintainable". Sushant Singh Rajput Death Probe: CBI Files FIR Against Rhea Chakraborty, Her Father, Mother, Brother, Manager Among Others.

Bihar Government has filed an affidavit in the Supreme Court stating that the transfer petition filed by Rhea Chakraborty is "misconceived and not maintainable". pic.twitter.com/lhq0wXwkfr

Rhea's transfer petition will be heard next week by the Supreme court and news coming in now states that Rhea has requested that her hearing with the Enforcement Directorate in relation to two of her property purchases in Mumbai, be postponed until Supreme Court gives its hearing, as per her lawyers. This comes in after Sushant's father, in his FIR, alleged the actress of abetting his son's suicide, theft, fraud, cheating and wrongful confinement.

(The above story first appeared on LatestLY on Aug 07, 2020 11:58 AM IST. For more news and updates on politics, world, sports, entertainment and lifestyle, log on to our website latestly.com).