Sushant Singh Rajput Was NOT Replaced In Fitoor And Half Girlfriend Over Nepotism; The Late Actor Revealed The Truth in An Old Interview

Some of the netizens have unearthed old tweets that mention how Sushant Singh Rajput was replaced by Arjun Kapoor and Aditya Roy Kapur in Half Girlfriend and Fitoor respectively. Apparently, the reason given was nepotism. 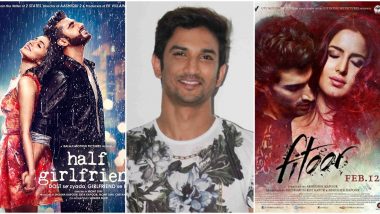 Sushant Singh Rajput Was NOT Replaced In Fitoor And Half Girlfriend Over Nepotism (Photo Credit: Twitter)

Every day comes one needless controversy on Sushant Singh Rajput's demise over another. It is an unfortunate fact that certain sections of netizens are using his death to push their own agenda. It hasn't been yet ascertained as to why Sushant took the fatal step to end his life, but Twitterati has already made up its mind - nepotism. What should have been a discussion on mental health awareness became a debate on nepotism, as netizens began to target Karan Johar, Ekta Kapoor and Salman Khan for 'sidelining' him. Was Sushant Singh Rajput the First Choice in Ram Leela and Bajirao Mastani, as Kangana Ranaut Claims? Here’s the Truth!

Is it true? We don't know, for that's the job of the Mumbai Police to find out. And if Sushant wanted the blame to be pinned on someone, he would have written a suicide note or something. Now Twitterati has found something new to blame the 'nepotism gang' on Sushant's demise.

Some of the netizens have unearthed old tweets that mention how Sushant Singh Rajput was replaced by Arjun Kapoor and Aditya Roy Kapur in Half Girlfriend and Fitoor respectively. Apparently, the reason given was nepotism.

These netizens are making an old tweet of Chetan Bhagat, when he announced Sushant was the male lead in the movie adaptation of his book.

So Arjun Kapoor did 'Half Girlfriend' bcoz of Nepotism #SushanthSinghRajput pic.twitter.com/bpvWBloB0t

OpIndia even did an article accusing nepotism of why Sushant was replaced in these films by Arjun and Aditya.

OpIndia article on Fitoor, Befikre and Half Girlfriend

So how true are these allegations? Was Sushant really replaced by the starkids (and Ranveer) over nepotism?

Well, instead of us clarifying the truth (like we usually do), we will let Sushant himself reveal what happened. As in an old interview that he had given to DNA in 2016, where Sushant clarifies why he had to leave these projects. And the reason is usual - date hassles.

In the interview, Sushant reveals that it was because of Raabta and Paani that he had to forgo about 12 films, which include Befikre, Half Girlfriend and Fitoor.

He had said, "What happens is, when I give my word to someone and he’s delaying (not because he wants to, but because of a particular reason) and I get to understand it, I won’t ditch. So be it the biggest film with the biggest studio or the smallest film, I won’t leave another film. So, unfortunately, because of the two films that I was doing and that didn’t happen, I lost out on 12 films in the last one year. One film didn’t happen and the other was put off by a few months. And these films are the films that we generally talk about these days. Let’s not get into all that."

He also clarified that he had said 'yes' to Fitoor without even reading the script. He added, "I sat for 90 days when I could have finished the film and then I chose to step out and then it didn’t happen. So, it was a series of unfortunate events, but what can I do? I always stick by my words. It’s again back to atoms, spaces and opinions." Also, a reminder here that it was Fitoor director Abhishek Kapoor who launched Sushant in Bollywood with Kai Po Che! and they later worked together in 2018's Kedarnath. Sushant Singh Rajput Demise: Bhumika Chawla Requests Fans Not To Blame People.

Sushant also mentioned in the interview he had no regrets leaving these projects. He said, "No. I don’t have any regrets. This is something I will follow for the rest of my life, the rest of my days that I am working in this industry. If I like the script and give you my word, I won’t ditch you just because I find some other film more exciting and bigger than the film I said yes to."

It is unfortunate that the films he chose to work in the interim - Raabta and Paani - didn't work in his favour. While Raabta was both a critical and commercial failure, Paani got shelved.

But we are also pretty sure that Sushant's real fans are not too displeased about the actor missing out on Befikre, Half Girlfriend and Fitoor. Their box office performance and bad reviews prove that Sushant dodged three bullets there!

(The above story first appeared on LatestLY on Jun 24, 2020 03:26 PM IST. For more news and updates on politics, world, sports, entertainment and lifestyle, log on to our website latestly.com).