National Award-winning veteran actor Pawan Malhotra says it is an advantage for him to bring life to such characters as he himself is a Punjabi. 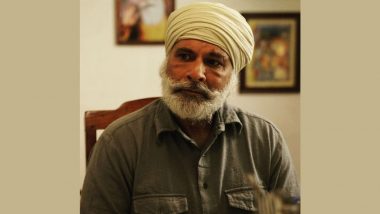 In recent times, the common thread between two of his on-screen characters - Gursevak Singh and Omkar Singh - is that both of them are Sikh. While the intense and nuanced performances of such Sikh characters in mainstream entertainment is breaking the stereotype about the community, National Award-winning veteran actor Pawan Malhotra says it is an advantage for him to bring life to such characters as he himself is a Punjabi. Tabbar Review: Pawan Malhotra and Supriya Pathak’s Tight Thriller Series Gets Further Elevated By Its Terrific Performances (LatestLY Exclusive).

Pawan told IANS: "Understanding the culture, the language, the little details that are unseen yet add to build a character is very important for an actor. Of course, the script is the Bible for me that I follow, but taking it to the next level by adding certain nuances comes from adding understanding. Tabbar Trailer Out! Pavan Malhotra, Supriya Pathak’s Family Thriller To Stream on SonyLIV From October 15! (Watch Video).

I am a Punjabi. So naturally, there are few things that we do in a typical Punjabi household that I can easily add to a Sikh or a Punjabi character when I am playing them. When I am acting in a Telugu film for instance, even though I know how to act, I will not be able to add those elements to make the performance richer. That is why I feel, it is an advantage for me to be a Punjabi while playing a Punjabi or a Sikh character."

His performance in the web series 'Tabbar', also featuring Supriya Pathak, Ranvir Shorey, Gagan Arora, Paramvir Singh Cheema, is receiving a positive response. However, this is not the first time that his portrayal of a Sikh character has been appreciated. Pawan also acted in the Punjabi film 'Punjab 1984', Hindi films like 'Jab We Met', and 'Mubarakan' among others. Quite interestingly in every character, he maintained some distinction through his performance.

"That is the whole idea that treating every Punjabi character differently through my performance. You see, no two individuals are the same. In our theatre days, we would practice such things in training as to how to play the same thing, situation, individual differently. Creativity comes from there. Having said that, in 'Tabbar' Ajit is a very good director with a clear vision," he shared. Coming from Delhi as a theatre artiste he started his career in Mumbai with a television show with some of his major performances in films like 'Black Friday', 'Bhaag Milkha Bhaag', 'My Name Is Anthony Gonsalves', Telugu films like 'Aithe', 'Anukokunda Oka Roju' among many others.

Referring to two of his earlier films he said, "You see I played a mafia don in 'Aithe' and then I played Tiger Memon in 'Black Friday'. Both the characters have an underworld connection but they are not the same. I also played more such underworld Mumbaikars in some of my Hindi films when people were stereotyping me saying 'Yeh underworld wala character achha kar leta hai'. But I am not a Mumbaikar, right? I think, as an actor, it is my job to make my audience believe everything that I am portraying on-screen; sometimes I use my craft, sometimes the community I come from. In 'Tabbar' it was a combination of well-written characters, a visionary director like Ajit and the fact that I am a Punjabi too. Rarely it happens that everything falls in place so nicely." Tabbar, written by Harman Wadala and Sandeep Jain, and produced by Ajay Rai, is streaming on SonyLIV.

(The above story first appeared on LatestLY on Oct 21, 2021 08:32 PM IST. For more news and updates on politics, world, sports, entertainment and lifestyle, log on to our website latestly.com).