Thappad Trailer: Taapsee Pannu's Film Is The Perfect Answer to How Preeti Should Have Reacted to Kabir Singh's 'Just One Slap'

It is truly a raw take on how society differentiates even between the regular domestic violence and just one slap in the heat of the moment. Yes, the same heat of the moment when Shahid Kapoor's Kabir Singh slapped Kiara Advani's Preeti. 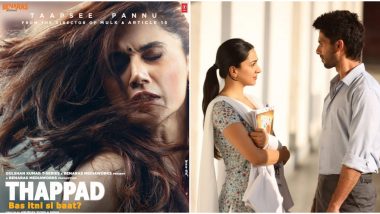 Anubhav Sinha's Thappad is what the audience needed since so long! In one of her interviews, Taapsee said that Thappad will be this year's Pink and that indeed seems true. The hard-hitting trailer is all about that one slap from a husband to her wife for whatsoever hell the reason is. It is truly a raw take on how society differentiates even between the regular domestic violence and just one slap in the heat of the moment. Yes, the same heat of the moment when Shahid Kapoor's Kabir Singh slapped Kiara Advani's Preeti. Shahid Kapoor Asks Why No One Targets Shah Rukh Khan's Baazigar but His Kabir Singh: These Reasons Might Help Him Find His Answer!.

It was just last year when the cine-goers were appalled by the glorification of the domestic violence in Sandeep Reddy Vanga's Kabir Singh. In one scene, we see Shahid slapping Kiara Advani during their argument and still they end up romanticising it. This received wide criticism from the audience.

However, the director of the film was adamant enough to justify the slap in the name of romance. Not just the filmmaker but the lead stars also kept on justifying the whole plot under the name of 'flawed characters' 'love' and 'aise log hote hai'  statements!

In his interview with Anupama Chopra, Sandeep also went on to rant, "I feel it's pseudo because...you know...when you're deeply in love, deeply connected with a woman and vice versa, there's a lot of honesty in it. And if you don't have that physical demonstration of...if you don't have the liberty of slapping each other, then I don't see anything there. If you can't slap, if you can't touch your woman wherever you want, you can't kiss, you can't use cuss words, I don't see any emotion in that. Then it's all margins. There is nothing unconditional about it then. It's all conditions."

Well, we wish Anubhav Sinha had released the Thappad trailer a bit before. Maybe then, we would not have to listen to these justifications that most of them still aren't ready to buy. We wish Preeti had said like Taapsee, "Pehli baar. nahi maar sakta. Bas itni si baat hai." We have finally found a way to justify our stand against that one slap in Kabir Singh through Thappad trailer. Because when someone slaps, the last thing want to listen to is..."dil ka dariya, beh hi gaya." No, it doesn't!

(The above story first appeared on LatestLY on Jan 31, 2020 01:22 PM IST. For more news and updates on politics, world, sports, entertainment and lifestyle, log on to our website latestly.com).