Celebrity Weddings 2020: From Scarlett Johansson-Colin Jost to Neha Kakkar-RohanPreet Singh – Celebs Who Said ‘I Do’ This Year

We woke up to a wedding announcement every day and it was absolutely mesmerising to see the lovely bride and groom celebrating their happy day with their fans. 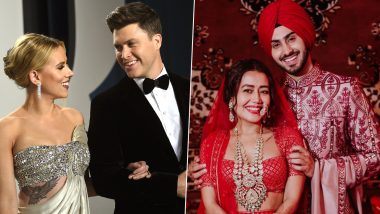 The pandemic might have made us all sit back at home but love was still spreading its charm all across the globe. We saw many celebrities get hitched this year in 2020 in intimate wedding ceremonies, thanks to coronavirus. Many Hollywood stars said 'I Do' in a hush manner while others made their marriage official through Instagram posts. Back here in the Indian film industry, we saw many stars tie the know as well. Stars like Scarlett Johansson-Colin Jost, Neha Kakkar-RohanPreet Singh were amongst the many who tied the knot in 2020. Scarlett Johansson Ties The Knot With Beau Colin Jost!

We woke up to a wedding announcement every day and it was absolutely mesmerising to see the lovely bride and groom celebrating their happy day with their fans. Some weddings came as a big shock to the audience while some wedding made us all feel mushy for the couple. Now as the year is ending, we are here to sum it all for you. Check out our list of celebrity wedding in 2020:

Scarlett Johansson and comedian Colin Jost got married in late October in a private ceremony. The couple officiated their engagement back in May 2019 after two years of dating. Their first public appearance together was in 2018 at the premiere of Infinity War.

John Cena fell in love with product manager Shat Shariatzadeh and after dating for a while, they tied the knot in Tampa, Florida on October 12. The couple met while John was in Vancouver, Canada, filming for Playing with Fire and were seen together since March 2019. John Cena Marries Longtime Girlfriend Shay Shariatzadeh in Private Ceremony.

Breaking many hearts, the Kissing Booth star Joel Courtney got hitched to his childhood sweetheart Mia Scholink. They tied the knot in a socially distanced outdoor ceremony in Phoenix, Arizona, on September 27. The two were friends since they were kids but the romance only began in 2017 and finally blossomed into a forever relationship.

Emma Stone met Dave McCary when she hosted SNL in 2016. Soon after this stint, the two were first linked as a couple in 2017. Stone and McCary announced their engagement on Instagram in December 2019 and are said to have tied the knots this year. The couple originally planned to marry in March but postponed the celebrations due to the pandemic. Back in 2019, Emma had posted a selfie that featured her showing a pearl engagement ring. Emma Stone and Dave McCary Postpone Their Wedding Due to Coronavirus Pandemic.

Musician Lilly Allen and our beloved Harper aka David Harbour married each other at the Graceland Wedding Chapel in Las Vegas on September 7. The lovebirds confirmed the surprise wedding by sharing a fun photo on social media and expressing their love for each other with cute captions.

After making his relationship with Miheeka Bajaj public back in May, Rana Daggubati got married to his ladylove on August 8. The celebration was quite intimate with only the presence of close family and friends for it. The close-knit yet mesmerising affair was hosted at a studio in Hyderabad.

Kajal Aggarwal surprised everyone with her wedding announcement. She tied the knot with entrepreneur Gautam Kitchlu in a private ceremony on October 30. The couple were wedded in a typical big fat Indian wedding style. Soon after the nuptials, the couple flew to the Maldives for their honeymoon. Kajal Aggarwal and Gautam Kitchlu’s Beachy Honeymoon Pictures From the Maldives Will Make You 'J'!

It was love at first sight for Neha Kakkar. She met Rohanpreet Singh on the sets of their song Nehu Da Vyah and love blossomed between them. The two tied the knot on October 24. Neha and Rohan flew to Dubai for their honeymoon soon after the wedding festivities and have been treating fans with adorable pictures of themselves. Neha Kakkar and Rohanpreet Singh’s First Karwa Chauth Celebration Photos Will Melt Your Heart.

Veteran singer Udit Narayan’s son Aditya Narayan married his Shaapit co-star Shweta Agarwal. The two had been dating for quite a long time and finally took the plunge earlier this month. The two got hitched on December 1 and are now looking forward to spending a lifetime together.

Niharika, daughter of producer Nagendra Babu married Chaitanya Jv with a beautiful wedding ceremony which held on December 9. Babu was quite emotional on the wedding day and posted a picture of her wedding getting married on social media. The two got hitched at Udaipur's Umaid Bhawan Palace in a grand yet intimate ceremony attended by only close family members and friends.

Shaheer Sheikh tied the knot with his long-time girlfriend Ruchikaa Kapoor during the last week of November this year. The couple opted for a court marriage given the ongoing COVID-19 pandemic and made it official on social media only on November 27. The couple has planned for a traditional wedding in June 2021. Shaheer Sheikh and Ruchikaa Kapoor Are Married! Groom Says, ' I'm Looking Forward to My Never-Ending Travels With Her'.

A month after announcing her departure from the entertainment industry, Sana Khan tied the knot with Anas Saiyad in an intimate ceremony on November 27. She shared pictures from all the festivities that took place on social media. Sana looked quite happy as she is all set to embark this new journey.

Choreographer Punit Pathak got married to fiancee Nidhi Moony Singh on December 11. The couple had got engaged during the lockdown and decided to have a low key wedding with only members of the family and a few close friends in attendance.

We wish the couples a very happy married life ahead. May 2021 bring a lot of love, compassion and happiness to these couples. We cant wait to see who all get married in 2021. Varun Dhawan - Natasha Dalal, Ranbir Kapoor - Alia Bhatt, Aadar Jain - Tara Sutaria, Malaika Arora - Arjun Kapoor, Puklit Samrat - Kriti Kharbanda are a few couple who are going strong and may get married next year.

(The above story first appeared on LatestLY on Dec 16, 2020 10:07 PM IST. For more news and updates on politics, world, sports, entertainment and lifestyle, log on to our website latestly.com).