Game of Thrones 8 Airs Finale Episode! Twitter Reacts With Memes and Jokes – Here Are the Best Ones

Emotions attached to the airing the last-ever episode, aren't GoT memes the best? 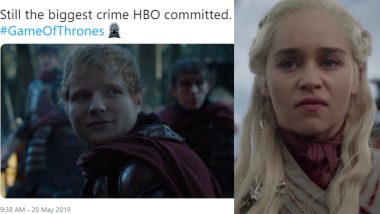 The moment we all wanted to avoid has happened. Game of Thrones has ended. Well, truth be told, many were looking forward, happily, to the end because they knew series finale will give the internet ample opportunities to create new memes and crack jokes. Emotions attached to the airing the last-ever episode, aren't GoT memes the best? So, while you recuperate from the gigantic end to the most-epic series ever, here is something to ease off the pain. We scrolled through the internet, like a psychopath stalking an ex, and we found the best of the best jokes for you. Game of Thrones 8 Finale: Emilia Clarke Reveals Kit Harrington Cried When He Learnt That Jon Snow Kills Daenerys Targaryen.

Although, goes without saying but some of these jokes are spoiler heavy. So, if you have not watched the final episode of Game of Thrones, we'd suggest you come back later. For the rest, let this Twitter get the ball rolling on this epic joke on Sansa talking about her brother's impotency. Game of Thrones Season 8 Finale: Daenerys Targaryen Looks Like a Dragon in This Shot Being Loved by Fans.

Was it really required, Sansa?

Mom: Set the table we have guests coming over

As if Deadpool is a piece of art

Everyone after watching Game of thrones Season 8#GameOfThrones pic.twitter.com/WBLTHHGp5x

We all have that one friend

When you don't contribute the group project and still get an A 😂😂😂 #GameOfThrones pic.twitter.com/34FdLo2FTG

This one's gonna remain a meme for a long time

Drive threw attendant: Do you want fries with that?

Jon Snow lured his Aunt in for a kiss then he stabbed her in the heart.#GameofThrones pic.twitter.com/MhMV71k76t

Drogon when he entered the throne room #GameOfThrones pic.twitter.com/Wzh7g8ixot

Lost or GoT? Which was worse?

but most importantly, the budget allowed for a Jon Snow pat #GameofThrones pic.twitter.com/AfDYYjsdLG

lena headey and nikolaj coster waldau just made a million bucks in the last episode for just laying there. iconic. #GameOfThrones pic.twitter.com/jLZLmAc1bO

Me during the opening theme vs me at the end of the episode #GameOfThrones pic.twitter.com/0mrJV9cmzI

And those were our favourite jokes that viewers cracked on Game of Thrones. It is tough to say if the journey was worth it at the moment. But one thing's for sure, the show has given us fodder for memes and jokes that will last a lifetime.

(The above story first appeared on LatestLY on May 20, 2019 10:30 AM IST. For more news and updates on politics, world, sports, entertainment and lifestyle, log on to our website latestly.com).