Game of Thrones Season 8 Finale: Daenerys Targaryen Looks Like a Dragon in This Shot Being Loved by Fans 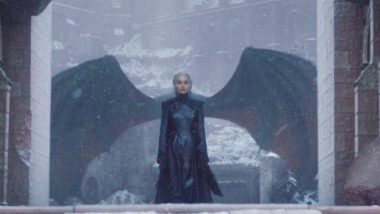 It's the end of an era. More impactful that Rachel and Monica parting ways as roommates in Friends. Internationally loved TV show Game of Thrones aired its final episode of the final season today. The show has been receiving a lot of flak of late. So, here is one praising the Free Folks out of it. The final episode might receive reactions from both ends of the spectrum, but fans are unanimously praising one particular scene. After destroying the entirety of King's Landing, Daenerys Targaryen has assumed the role of the ruler of the Seven Kingdoms. And for a brief second in the episode, she becomes the dragon. Game Of Thrones Season 8 Episode 6: THIS Major Character Death in the Finale Will Make You Say 'We Saw This Coming' (SPOILER ALERT).

As she is standing atop her castle, Dany gives an ill-fitting speech to her army men. It is then we see Drogon, the last remaining of the three dragons, behind her. He is standing so perfectly behind his Mother, that it gives an illusion that Dany has grown her wings. Game of Thrones Actor Isaac Hempstead Wright (Bran Stark) Calls Petition to Redo Season 8 ‘Ridiculous and Absurd’.

No matter the outcome, this scene where Daenerys advances forward in her incredible goth gear with Drogon's wings perfectly framing her is ridiculously epic.#GameOfThrones #GameOfThronesFinale #GOTFinale pic.twitter.com/ePxuxbP4Pf

Queen of the Ashes

Despite what we all think about this series finale, Daenerys becoming the Dragon Queen is one of the greatest shots in TV history.#GameofThrones#GameOfThronesFinale pic.twitter.com/JeZQSWJZZf

One of the best shots of this season #GameofThrones #TheFinalEpisode pic.twitter.com/6arXGqCZuF

As you can see the shot is a cinematography marvel. One of the many examples of exemplary cinematography employed in the show. This scene not only looks good but has a metaphorical impact as well. Daenerys Targaryen was played by Emilia Clarke on Game of Thrones. You'll be missed.

(The above story first appeared on LatestLY on May 20, 2019 08:55 AM IST. For more news and updates on politics, world, sports, entertainment and lifestyle, log on to our website latestly.com).