The actor is playing Mason in the movie but considering his absence from the movie's trailer, one can deduce that his identity has been intentionally kept hidden and he could be the main villain, Taskmaster. 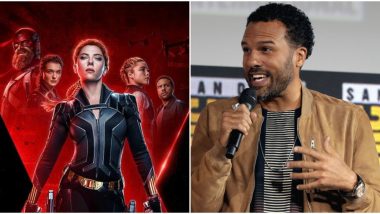 What's up with O-T Fagbenle really? Is he the next Tom Holland in MCU when it comes to spilling beans that he shouldn't? Or is he simply too good at teasing his fans about a scenario that's never going to happen. While Scarlett Johansson's Black Widow is gearing up to be the only Marvel release to his the screens this year, a lot is yet to be discussed about that. Yes, we know Florence Pugh and Rachel Weisz play other Black Widows like Johansson's character but who is Taskmaster? Which actor is playing the antagonist in Johansson's finally... solo movie? There are chances that Fagbenle could be the answer to your question. Scarlett Johansson's Black Widow to Premiere on Disney+ ? David Harbour Has This to Say About It.

During his recent Instagram live session with a friend, Fagbenle dropped a hint about him playing Taskmaster in Marvel's next big release. Yes, again. If you check the video below at six-minute mark, you can hear him saying, "There’s a whole conspiracy theory that I’m Taskmaster." His friend then replied, "you probably are." To which, Fagbenle quipped, "you’re trying to get it out as well? I thought we spoke about this, I thought we were going to keep some s*** on the DL." Marvel’s Black Widow, Disney’s Mulan, Jungle Cruise Get New Release Dates After COVID-19 Pandemic Affects Original Slots – Read Deets.

Check Out his Conversation at Six-Minute Mark

Chatting with @breshawebb about @maxxx marvel and a bunch of randomnesso

The actor is playing Mason in the movie but considering his absence from the movie's trailer, one can deduce that his identity has been intentionally kept hidden. Earlier the actor had shared a picture on Instagram with #Taskmaster but was quick to delete it. Such multiple 'hint' bombs are really a big deal for us but there's no way we can know the truth until November this year when Black Widow will finally hit the screens.

(The above story first appeared on LatestLY on May 13, 2020 03:54 PM IST. For more news and updates on politics, world, sports, entertainment and lifestyle, log on to our website latestly.com).