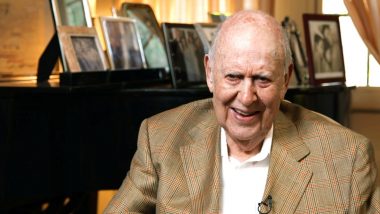 Popular American comedian and actor Carl Reiner passed away on Monday night at his Beverly Hills home of natural causes. The stand-up comedian, actor, director, producer, writer and singer entertained the audiences for years and had a brilliant career. The news was confirmed by Reiner's assistant Judy Nagy. Reiner who was the father of filmmaker Rob Reiner was best known for creating and starring in The Dick Van Dyke Show. He also directed popular films such as Oh God, The Jerk and All Of Me.

As an actor too, Reiner appeared in some famous films and TV series. Many will remember him for his role in Ocean’s Eleven films. He also had recurring roles in sitcoms such as Two and a Half Men and Hot in Cleveland. Not just this, he was also a voice actor on several shows. Rob Reiner Birthday: When Harry Met Sally, A Few Good Men and Other Best Works of the American Director.

Reiner continued to stay connected with his audiences even in his 90s. The actor was one of the oldest celebrities to have been an active user of Twitter. Confirming the death of his father on Twitter, Rob Reiner wrote, "Last night my dad passed away. As I write this my heart is hurting. He was my guiding light."

Last night my dad passed away. As I write this my heart is hurting. He was my guiding light.

Talents like Carl Reiner are and the multitalented personality will be dearly missed by Hollywood folks and American audiences. Rest in peace, Carl Reiner.

(The above story first appeared on LatestLY on Jun 30, 2020 08:22 PM IST. For more news and updates on politics, world, sports, entertainment and lifestyle, log on to our website latestly.com).