Rob Reiner Birthday: When Harry Met Sally, A Few Good Men and Other Best Works of the American Director

Reiner's filmography is varied ranging from romance dramas to coming-of-age gems such as Stand By Me. Reiner has also famously played Tom Hanks' character's friend in the famed romantic drama, Sleepless In Seattle. 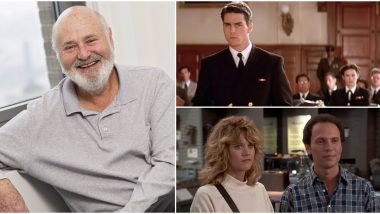 Rob Reiner is one talented personality who has not only directed but also written and starred in movies. The filmmaker work ranges from co-writing the pilot episode of Happy Days to directing films such as A Few Good Men and When Harry Met Sally. Reiner's filmography is varied ranging from romance dramas to coming-of-age gems such as Stand By Me. Reiner has also famously played Tom Hanks' character's friend in the famed romantic drama, Sleepless In Seattle. Although his biggest acting credit is for essaying the role of Michael Stivic on All in the Family (1971–1979). This role also won him two Emmy awards. Nicholson Gave Same Performance over 7 Takes in 'A Few Good Men' Iconic Courtroom Climax.

Reiner celebrates his birthday on March 6 and as the actor-filmmaker turns 73, we look at some of his best-directed films. It's difficult to pick the best works of a personality such as that of Reiner whose contribution to Hollywood has been immense. Among our top picks from his directorial works, one of the favourite ones is certainly the famed rom-com When Harry Met Sally starring Billy Crystal and Meg Ryan. Here's a look at his other directorials(not a ranking).

One of the most famous Hollywood rom-coms that discussed the age-old question, "Can a guy and a girl remain 'just friends'" showed Meg Ryan's Sally and Billy Crystal's Harry starting off as unlikely friends who keep running into each other over the course of a few years and eventually find love in one another. This is one of Reiner's most famous works and is written by Nora Ephron.

Stand By Me is considered to be one of Reiner's best works. The coming of age film is based on Stephen King's book The Body. The film starred Wil Wheaton, River Phoenix, Corey Feldman, and Jerry O'Connell in lead. The film revolving around friendship and indelible experiences of growing up had some incredible performances by Phoenix and Jerry O'Connell in his debut.

The Princess Bride is an American fantasy drama starring Cary Elwes, Robin Wright, Mandy Patinkin, Chris Sarandon, Wallace Shawn, André the Giant, and Christopher Guest in lead roles. The witty modern fairytale received a lot of love from the critics as well as audiences. The film has legions of fans who never get tired of rewatching this gem.

One of the finest legal dramas starring Tom Cruise, Jack Nicholson, and Demi Moore in lead roles, the film revolves around a young Navy lawyer investigating a murder case. The courtroom drama had some brilliant performances, particularly from Nicholson and Cruise. The film was written by Oscar-winning screenwriter Aaron Sorkin and consists of some brilliant dialogues. Elisabeth Moss Finally Reveals the Truth Behind Dating Rumours With Tom Cruise.

This is Spinal Tap is another Reiner film that received immensely positive reviews. The film is a great example of the mockumentary genre and the humour is just spot on. The film stars Christopher Guest, Michael McKean, and Harry Shearer in lead roles. The film parodies Hard Rock and Heavy Metal bands and it is all done too cleverly.

In case you haven't watched any of the film's above, do give Reiner's work a chance considering there is something about his films that always hits the nerve. Tell us your favourite Rob Reiner film in comments below.

(The above story first appeared on LatestLY on Mar 06, 2020 10:30 AM IST. For more news and updates on politics, world, sports, entertainment and lifestyle, log on to our website latestly.com).