Daniel Radcliffe Birthday: 7 Best Harry Potter Moments of the British Actor That Cast His Charming Spell on Us! 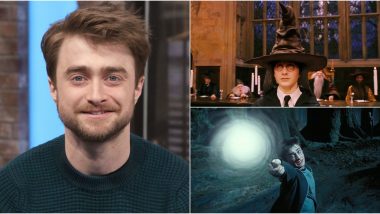 Daniel Radcliffe is probably best known as Harry Potter given that is one of his most famous on-screen roles and also a beloved one at that. The actor began his acting career with made his acting debut at age 10 in BBC One's television film David Copperfield (1999), followed by his cinematic debut in The Tailor of Panama. In 2001, he also starred in the first Harry Potter film and then continued to essay the role of the bespectacled wizard for the next ten years in the film's franchise which consisted of seven films. Daniel Radcliffe IS NOT Suffering From COVID-19, Actor Confirms.

Over the years, Radcliffe has starred in several other films and shown his amazing talent. His performances in films such as  December Boys, Swiss Army Man among others received a lot of praises from critics. As the actor celebrates his birthday on July 23 and turns 31, we celebrate the actor's most beloved work, Harry Potter. The charm that Daniel Radcliffe brought to this role is unmatched and we can't imagine anyone else playing this character from the J K Rowling's wizarding world. Here's looking at his best moments in Harry Potter.

Daniel Radcliffe's cute, innocent expressions in Harry Potter and The Sorcerer's Stone were simply adorable and in the first film, we particularly love the amazement on his face when he gets 'sorted' into Gryffindor. The whole scene where Radcliffe is first seen muttering under his breath "Not Slytherin" and later getting sorted in the house that he wished for is a delightful moment.

When Harry Finds Out He's a Parselmouth

In Harry Potter and The Chamber Of Secrets, as Radcliffe's Harry Potter returns for another exciting year, it is also the first time that he indulges in his first duel and it is opposite none other than his arch-rival, Draco Malfoy. This is also the moment Harry learns that he can speak parseltongue and it is simply mindblowing.

Harry Potter and the Prisoner Of Azkaban had one of the greatest moments for all Harry Potter book fans given that this film gave us the amazing scene of the Patronus charm. Watching Daniel Radcliffe's Harry Potter perform a full-blown Patronus made not only Professor Lupin proud but us too!

One of the most hilarious scenes Harry Potter and the Goblet of Fire is when for one of his Triwizard tournament tasks, Harry has to take a rather 'long' bath in the Prefect's bathroom to find out one of the clues. Well, unfortunately, Potter is not really alone given that Moaning Myrtle gives him company. Daniel's awkward expressions in this scene are simply amazing and this scene always manages to crack us up!

I Must Not Tell Lies!

In Harry Potter and The Order Of the Phoenix, Radcliffe's Harry Potter has a rather tough year with Ministry of Magic's Dolores Umbridge taking control of Hogwarts. Towards the end of the film, when Umbridge gets captured by centaurs, she asks for Harry's help and he replies with a fitting "I Must Not Tell Lies". It's a powerfully redeeming moment and the sadistic pleasure we get watching Potter give Umbridge her silly advise back, is always amazing.

While Harry Potter is destined for big things, his character is shown to be rather grounded and modest and that's what makes him likable. In Harry Potter and the Half-Blood Prince, for just one second, we see Harry almost relishing being famous as he confidently tells Hermione, "But I am the Chosen One" after she tells him about girls trying to sneak him love potions thinking that 'he's the chosen one' is a lovely scene. Radcliffe and Emma Watson's friendly camaraderie makes it an endearing one. Harry Potter Turns 39 Years Old: 15 Amazing Details About the Boy Wizard and His Friends That You Probably Didn’t Notice in the Movies!

In Deathly Hallow's Part I, after Ron Weasley decides to leave his friends on their search for Horcruxes, Harry Potter and Hermione Granger have a few sombre moments. At one point, when the radio that has been only spreading bad news plays a musical theme and that's when Harry asks Hermione for a dance, to lift her spirits as she tries to cope with Ron having gone. It's a beautiful moment of the amazing friendship that Harry and Hermione share.

The Moment He Knows He's Won!

In the Deathly Hallows part II, Radcliffe's Harry Potter has finally gotten rid of all the Horcruxes except Nagini. After Neville Longbottom gets rid of the snake, Radcliffe's Harry has a moment of rejoice as he realises that it's just Tom Riddle/Voldemort and him now. His face twitches into a smile for a second and immediately he's into attack mode as he once and for all finishes Voldemort. That one moment is far too joyous.

We bet your love for Daniel Radcliffe's Harry Potter never really lessens. These films will forever be a part of the actor's legacy and we couldn't be happier to have enjoyed watching him bring to life one of our most favourite literary characters of all time.

(The above story first appeared on LatestLY on Jul 23, 2020 09:10 AM IST. For more news and updates on politics, world, sports, entertainment and lifestyle, log on to our website latestly.com).