Ryan Reynolds surprised fans after dropping a video featuring Deapool reacting to Free Guy’s trailer. The catch with the video was that Deadpool had a special guest with him alongside. 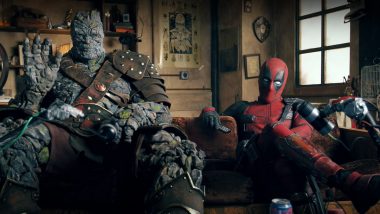 Ryan Reynolds surprised fans after dropping a video featuring Deadpool reacting to Free Guy’s trailer. The catch with the video was that Deadpool had a special guest with him alongside. The special guest you ask? It was none other than Korg. Yep, that’s right, Korg from MCU. Taika Waititi reprises his role as our favorite rock monster in this four minute video. Together, Korg and Deadpool react to the Free Guy trailer. It made sense considering how both Ryan Reynolds and Taika Waititi are starring in Free Guy.  Free Guy: Deadpool and Korg Do a Trailer Reaction of Ryan Reynolds’ Upcoming Film, and It Is Expectedly Hilarious AF! (Watch Video).

This particular video has fans excited because for long they have been asking for Deadpool to join the MCU, and with this video it seems like their wish was fulfilled. This marks the first time that our favorite Merc with a Mouth has interacted with a character outside of the FOX X-Men universe.

You can check out the video down below:

We all know by now that a third Deadpool film is in development at Marvel Studios, but there is no official announcement on the same. Or whether Deadpool would join Marvel Cinematic Universe. This video may be the first hint to him joining the film universe. Hugh Jackman Hints at Returning as Wolverine in MCU; Will the X-Men Star Also Show Up in Ryan Reynolds’ Deadpool 3?

Deadpool is widely known for breaking the fourth wall and we get plenty of that over here. He starts off by parodying YouTubers who react to movie trailers, and then in classic fashion invites Korg over to react to the Free Guy trailer alongside him. As the video continues on, both of them poke fun at each other. Deadpool pokes fun at Ryan Reynolds in classic Deadpool fashion. It’s a hilarious bit that highlights both of their respective actors' comedic chops.

Whatever this video might be hinting towards the future of Deadpool, it was just great to watch these two characters interact with each other. With the passage of time we can just hope that Deadpool is soon introduced into the MCU and we get more character interactions. Free Guy is scheduled to release on August 13, 2021.

(The above story first appeared on LatestLY on Jul 14, 2021 09:48 PM IST. For more news and updates on politics, world, sports, entertainment and lifestyle, log on to our website latestly.com).