Doctor Strange in the Multiverse of Madness: From Tom Cruise as Iron Man to Balder the Brave, 5 Rumours Proved False After Benedict Cumberbatch’s Marvel Film Came Out! (SPOILER ALERT)

There were a bunch of rumours before release that stated many marvel characters would show up, but that went absolutely nowhere. So, with that being said, let’s explore five rumours of Doctor Strange in the Multiverse of Madness that were proven false. 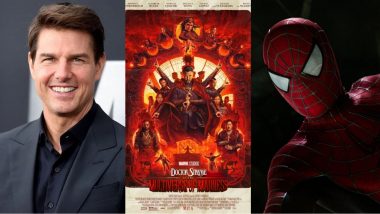 Many fans believed that Tobey Maguire’s Spider-Man would appear in the Doctor Strange sequel because Sam Raimi is back at the helm, and Maguire returned as the character in Spider-Man: No Way Home. But that didn’t pan out exactly the way fans wanted it to.

With Fox now being a part of the MCU, Deadpool was rumoured to make an appearance in the film. So much so, that many fans even believed that spotted him in one of the posters. Welp, we all know how that worked out.

Bruce Campbell always is a part of Sam Raimi’s movies. Either it be a main role or a cameo, he is going to be there no matter what. Many believed that Bruce would be a member of the Illuminati playing the role of Balder the Brave, but he turned out to be a Pizza Poppa vendor.

When the rumour of Mr Fantastic cameoing in the film got out, many people wondered if it would be John Krasinski or Ioan Gruffudd, who portrayed the role in early ‘2000s Fantastic Four films. So fans were quite ecstatic when they saw Krasinski in the role.

Coming to the mother of all rumours of this film, Tom Cruise as Iron Man is the one that has been heavily debated. Apparently, Cruise was never supposed to appear in the film, but the rumour mill made it seem so. Fans are actually believing that THE Tom Cruise shot scenes for the movie, but Marvel decided to leave them on the cutting room floor.

(The above story first appeared on LatestLY on May 10, 2022 07:40 PM IST. For more news and updates on politics, world, sports, entertainment and lifestyle, log on to our website latestly.com).