Doctor Strange in the Multiverse of Madness: Writer Michael Waldron Confirms Tom Cruise's Cameo as Iron Man Was Never an Option For This Reason!

Doctor Strange in the Multiverse of Madness writer Michael Waldron has debunked one of the biggest rumours surrounding the film. He confirmed that Tom Cruise was never an option for the movie due to availability. 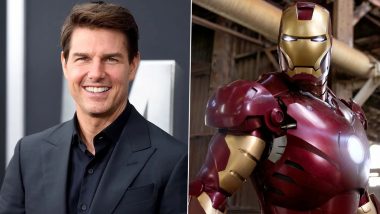 One of the biggest talks about Doctor Strange in the Multiverse of Madness after its release has been is that how Tom Cruise's Iron Man was apparently cut out of the film. Many fans believe that the Mission: Impossible actor filmed key scenes, but they never made it to the cut. Now the writer of the film, Michael Waldron, has debunked those rumours by saying that Tom Cruise was never an option, although he had pitched the idea to Kevin Feige. Doctor Strange in the Multiverse of Madness Ending Explained: Decoding Climax, Post-Credit Scenes and Star-Cameo in Benedict Cumberbatch's Marvel Film! (SPOILER ALERT).

Check Out The Full Quote Below:

Michael Waldron says he asked Kevin Feige about the possibility of including Tom Cruise as Iron Man in #MultiverseOfMadness but adds “I just don’t think it was ever an option, because of availability.”

(The above story first appeared on LatestLY on May 10, 2022 12:51 PM IST. For more news and updates on politics, world, sports, entertainment and lifestyle, log on to our website latestly.com).