COVID-19 played spoilsport and Harish Patel couldn't attend the event as he was diagnosed with the novel coronavirus. 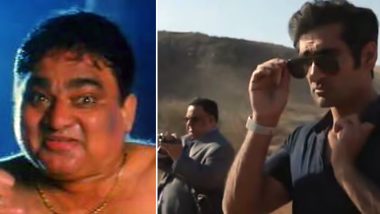 Indian actor Harish Patel stars in the upcoming Marvel movie Eternals and he was all set to fly to Los Angeles to attend the film's grand premiere on October 17 for the red carpet event. However, COVID-19 played spoilsport and the Bollywood actor couldn't attend the event as he was diagnosed with the novel coronavirus. News 18 and other news portals reported the news and it will be unlucky for the veteran actor to miss such a grand event. Harish Patel is known for his iconic role of Ibu Hatela from the film Gunda. Eternals: Harry Styles’ Cameo in the MCU Film Was ‘Leaked’ by Salma Hayek Back in June! (Watch Video).

Harish Patel expressed his excitement talking to a leading daily and mentioned that this will be the first-ever superhero movie that he will watch and that too at the premiere.  Helmed by Oscar-winning director Chloé Zhao, Eternals stars Angelina Jolie as Then, a warrior possessing immense strength, speed and stamina. Chloe Zhao Says Her Eternals Pitch to Marvel Boss Kevin Feige Had a William Blake Poem.

The film also stars Richard Madden as Ikaris, Salma Hayek as Ajak, Gemma Chan as Sersi, Kumail Nanjiani as Kingo, Brian Tyree Henry as Phastos, Lauren Ridloff as Makkari, Lia McHugh as Sprite, Barry Keoghan as Druig and Don Lee as Gilgamesh. Kit Harington of Game of Thrones fame plays Dane Whitman, a human associated with the Eternals. They all come together to protect the Earth the Deviants. In India, Eternals will be clashing with Akshay Kumar's Sooryavanshi at the Box Office as both films to release on November 5.

(The above story first appeared on LatestLY on Oct 21, 2021 06:53 PM IST. For more news and updates on politics, world, sports, entertainment and lifestyle, log on to our website latestly.com).