From Oscar Isaac’s Moon Knight to Natalie Portman’s Mighty Thor, 5 New Superheroes to be Introduced in the MCU in 2022!

With four new Disney+ shows and three new movies, the MCU again will be giving us loads worth of new content. Not only that, but most of these series are also based on new characters 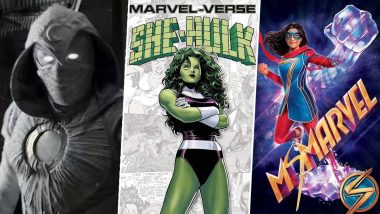 New Superheroes to be Intrdouced in MCU (Photo Credit: Twitter)

In 2021, Marvel had one of its biggest year as it gave us nine projects in all with five Disney+ series and four movies. While there were some hiccups along the way, the projects all gave us some new amazing characters and expanded the MCU with countless new superheroes. We had the likes of Sylvie, Kate Bishop and US Agent introduced. Those alone built up the MCU and set their futures up quite nicely. Moon Knight: Know More About Oscar Isaac's Marvel Superhero Set to Debut in His Own Disney+ Series!

Talking about new superheroes, MCU’s 2022 slate even seems to be introducing even more. With four new Disney+ shows and three new movies, the MCU again will be giving us loads worth of new content. Not only that, but most of these series are also based on new characters. So with that being said, here five new superheroes who will be introduced in the MCU in 2022. Ms Marvel: Kamala Khan Will Be Displaying Different Superpowers From Her Comicbook Avatar in the Disney+ Series - Here's How!

Hulk fans are in for a treat as the Hulk mythos is about to expand, starting with She-Hulk. Debuting in her own Disney+ series, Jennifer Walters transforms into the big green monster after she receives a blood transfusion from her cousin. It’s unknown when the series is about to debut, but we can’t wait for it.

Set to debut in Doctor Strange in the Multiverse of Madness, America Chavez is gifted with powers of traveling through different universes. Portrayed by Xochitl Gomez, she will star alongside Benedict Cumberbatch. If you have seen the trailer for Multiverse of Madness, then you can see a few glimpses of her. Also being an LGBTQ character, she will be a great addition to Marvel’s diverse cast.

A lot of controversy has been surrounding around this project in regards to leaks saying her powers will be changed, but it still has us excited to see the debut of this fan favourite. Portrayed by Iman Vellani, Ms Marvel in the comics is an Inhuman who has powers similar to that of Reed Richards. Ms Marvel has been a popular character for a good while now, and we can’t wait for her to debut in the MCU.

MCU is about to get an extra Thor as Jane Foster is set to take up that mantle in Thor: Love and Thunder. In the comics, Foster takes up being Thor as she has cancer. The catch being, everytime she reverts back to her human form her cancer worsens. Natalie Portman is set to reprise her role, and given the concept of the plot, she is definitely going to smash it.

We got our first glimpse at Moon Knight when Marvel dropped its new trailer a while back, and to no one’s surprise it looks amazing. Moon Knight starring Oscar Isaac sees him portray the role of Steven Grant, who starts losing the grasp of reality when his alter ego shows up. This is a character that’s dark, weird and the right amount of violent that MCU needs.

(The above story first appeared on LatestLY on Jan 20, 2022 12:55 PM IST. For more news and updates on politics, world, sports, entertainment and lifestyle, log on to our website latestly.com).