Jason Momoa's Aquaman 2 Gets a Release Date, Will Hit the Screens On December 16, 2022

Jason Momoa's Aquaman 2 will clash with an untitled live-action movie announced by Disney. 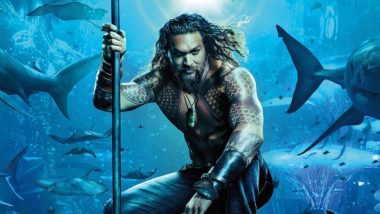 Jason Momoa's Aquaman 2 was a big hit for DC and it was no brainer that they would plan a sequel for it. In fact, the makers had teased us about its second part towards the end of the movie, in its post-credit scene. The studio had earlier announced the return of David Leslie and Johnson-McGoldrick to pen the script for the film's sequel which will be produced by Aquaman director, James Wan and Peter Safran. The movie performed exceptionally well at the box office and minted over $68.7 million in its opening weekend in North America. It’s currently the 20th-highest worldwide grosser of all time. And a sequel for the same only makes sense. Oscars 2019 Funny Memes: From Aquaman Jason Mamoa’s Scrunchie to Billy Porter’s ‘Cinderella’ Outfit, Best Academy Award Jokes to LOL.

Aquaman starred Jason Momoa and Amber Heard in the lead role along with Willem Dafoe, Patrick Wilson, Dolph Lundgren, Yahya Abdul-Mateen II, and Nicole Kidman in supporting roles. We wait to hear if the rest of the cast will mark their return in this sequel. Earlier Warner Bros had announced a movie on Trench, which would be a horror spin-off to Aquaman. James Wan and Peter Safran will produce the movie and a director and cast for the same are yet to be announced. Captain Marvel Pre-Sale Tickets Have Already Surpassed DC's Wonder Woman and Aquaman.

(The above story first appeared on LatestLY on Feb 28, 2019 09:13 AM IST. For more news and updates on politics, world, sports, entertainment and lifestyle, log on to our website latestly.com).