Juno: Elliot Page Remembers Being Forced To Wear a Dress at the Movie’s Premiere

Elliot Page is one of the most famous trans people in the world and has a memoir called Pageboy coming out soon, that will showcase Elliot Page's struggles in his life and cover other important topics as well. 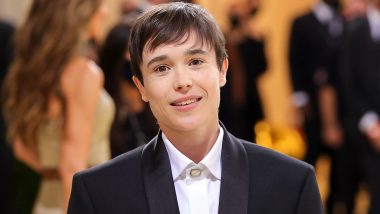 Actor Elliot Page has opened up about how being closeted in Hollywood almost killed him and how he was forced to wear a dress at the premiere of Juno. Page told Esquire: "I was closeted, dressed in heels and the whole look, I wasn't okay, and I didn't know how to talk about that with anyone." Elliot Page Birthday Special: From Inception to X-Men Days of Future Past, 5 of the Actor’s Best Films According to IMDb!

When Juno was blowing up this sounds strange to people, and I get that people don't understand. Oh, f*** you, you're famous, and you have money, and you had to wear a dress, boo-hoo. I don't not understand that reaction."

"But that's mixed with: I wish people would understand that that s*** literally did almost kill me."

Next year, Page is set to release the memoir, Pageboy, which will "delve into" his feelings about "body, experiences as one of the most famous trans people in the world," along with other themes, such as mental health, dating and the toxic culture of the film industry, reports femalefirst.co.uk. The Umbrella Academy Season 3: New Poster of Elliot Page, Tom Hopper and Javon Walton’s Netflix Show Released.

Publisher Flatiron said: "The memoir will delve into Page's relationship with his body, his experiences as one of the most famous trans people in the world, and will cover mental health, assault, love, relationships, sex, and the cesspool that Hollywood can be." The news was also shared on both the publisher's and Elliot's Instagram Stories.

(The above story first appeared on LatestLY on Jun 02, 2022 07:28 PM IST. For more news and updates on politics, world, sports, entertainment and lifestyle, log on to our website latestly.com).