The moment you've been waiting for is finally here! As the first explosive still of Darkseid from Justice League's Snyder Cut has been officially dropped online. 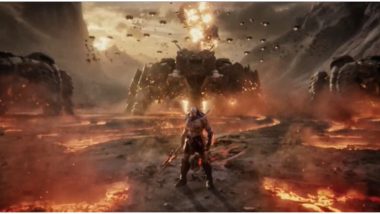 The moment you've been waiting for is finally here! As the first explosive still of Darkseid from Justice League's Snyder Cut has been officially dropped online. Nope, we are not kidding, as this just happened. For the one's living under the rock, it was announced a while ago that Snyder Cut would make its way on HBO Max in 2021. Described as "an entirely new thing" and going by the glimpse of the villain, this one looks really different and not something fans would ever imagine. Also, the confirmation of Synder Cut's official release echoes how the movement namely #ReleaseTheSnyderCut which was all over the internet for almost 2.5 years finally got its justice. Justice League's Snyder Cut May Premiere On HBO Max.

Elaborating on the picture, it shows a far away shot of Darkseid surrounded by fire and dark. FYI, Darkseid was supposed to be part of Justice League, but sadly that did not happen and what Zack just shared on Twitter is killer and how. In a nutshell, what's Thanos to Marvel, Darkseid is to DC and we bet fans would be the happiest ones today. As the look shared by Zack is terrifying AF. #ReleaseTheSnyderCut: After Gal Gadot, Ben Affleck and Jason Momoa's Posts, DC Fanboys' Demand for Zack Snyder’s ‘Justice League’ From Warner Bros Just Got Stronger.

Check Out Darkseid's First Glimpse from the Snyder Cut Below:

Earlier, HBO Max’s Bob Greenblatt had revealed some information with regards to Synder Cut and stated that the dark world would cost more than $30 million. He had said, “It isn’t as easy as going into the vault and there’s a Snyder Cut sitting there to put out. It does not exist. Zack is actually building it, and it’s complex, including new VFX shots. It’s a radical rethinking of that movie and it’s complicated and wildly expensive. I’ll just say I wish it was just $30 million and stop there. It’s an enormous undertaking and very complex.”

However, it's not yet clear if HBO Max will release the Snyder Cut in its original four-hour-long cut together or divide it into six episodes. Stay tuned!

(The above story first appeared on LatestLY on May 27, 2020 08:13 PM IST. For more news and updates on politics, world, sports, entertainment and lifestyle, log on to our website latestly.com).