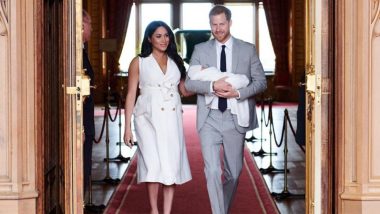 Meghan Markle entered a completely different zone when she married a Prince. A woman who had no idea about the royal life obviously had to make a lot of adjustments when she tied the knot with Prince Harry. She did a great job though, many will agree. But to err is human, no? Meghan apparently made quite a faux pas during the first year of their marriage when she announced her pregnancy to other royals. Now, she had to follow a lot of rules when she was pregnant with Baby Archie. But amidst all this, she made a bit of a boo-boo, it seems.

According to royal authors Andy Tillett and Dylan Howard, Meghan announced her pregnancy at Princess Eugenie's wedding to Jack Brooksbank in October 2018, thereby "embarrassing Prince Harry". In their new book, Royals at War, Tillet and Howard have also claimed that Eugenie and her mother, Sarah Ferguson, were "furious". After all, Meghan stole the limelight from Eugenie on her big day. "Meghan put her foot in it when she decided that it would be the ideal moment to announce that she and Harry were expecting their first child. This was a huge social gaffe, even if you were not a royal—stealing the limelight from Eugenie, who was furious, as was her mother, Sarah," they wrote according to The Sun. While Meghan Markle Is Being Optimistic, Prince Harry Is Reportedly Feeling Guilty After Moving Out Of The Royal Family.

Today The Duke and Duchess of Sussex are delighted to share their first public moment as a family. They are so incredibly grateful for the warm wishes and support they’ve received from everyone around the world, since welcoming their son two days ago. Photo cred: Chris Allerton ©️SussexRoyal

However, we don't know if Andy and Dylan's version of this incident is authentic, simply because royal sources denied that Harry and Meghan broke their pregnancy news at Eugenie's wedding. Eugenie's wedding took place October 12 and the Sussexes announced the pregnancy to the public via Instagram on October 15.

So, for all, you know this might be a big rumour. Talking about the rules that Meghan had to follow during her pregnancy, we did a bit of reading and found some interesting things. For example, as a general rule, royal expecting mothers are expected to wear closed-toed shoes, even if she is dealing with swollen feet or ankles. Bizzare, right? But these are the things that set royals apart, no?

(The above story first appeared on LatestLY on Jul 06, 2020 11:22 AM IST. For more news and updates on politics, world, sports, entertainment and lifestyle, log on to our website latestly.com).