PC will be next seen in a Bollywood film called The Sky is Pink, that will also star Farhan Akhtar and Zaira Wasim in the lead. 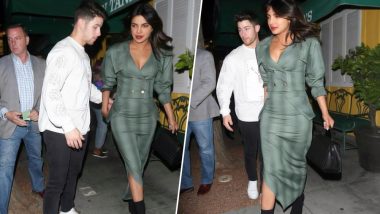 Priyanka Chopra and Nick Jonas were spotted together, once again! The beautiful couple always lights up the Instagram feed with their mere presence. The magical duo was spotted again in Los Angeles looking stylish as ever. After all, PeeCee can never really go wrong with her sartorial choices. They were spotted in casual attire and were all smiles for the paparazzi. Priyanka Chopra Shares a Hilarious Video of Husband Nick Jonas Grooving to Govinda’s Meri Pant Bhi Sexy – Watch Video.

Nick wore a cool white sweatshirt paired with black pant. On the other hand, PeeCee looked stunning in a grey semi-formal outfit with a thigh-high slit. She completed her look with a dark wine shaded lipstick. She was also spotted kissing a toddler and that left the fans to go "awww." Check out the pictures below.

Nick and PC are on a spree of promoting the songs from the new album by Jonas Brothers. After "Sucker", they released a new track called "Cool". The song was loved by the fans and are eagerly waiting for the next release already!

PC will be next seen in a Bollywood film called The Sky is Pink, that will also star Farhan Akhtar and Zaira Wasim in the lead. The flick is directed by Shonali Bose. Coming back to the pics, why are PC-Nick so wonderful together?

(The above story first appeared on LatestLY on Apr 10, 2019 06:53 PM IST. For more news and updates on politics, world, sports, entertainment and lifestyle, log on to our website latestly.com).