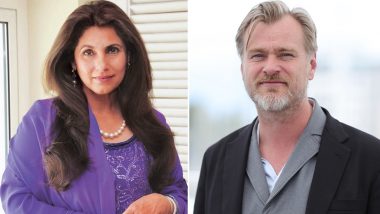 The Bollywood lovers were taken by surprise when it was announced that veteran actress Dimple Kapadia has been roped in for the ace filmmaker’s movie Tenet. Christopher Nolan has given some iconic films such as The Dark Knight, The Dark Knight Rises, Interstellar, Dunkirk and more. Fans couldn’t contain their excitement when the announcement on Tenet was made. And now there are reports stating that the film will be shot in Mumbai. Is it true? Read further to know more. Tenet: Dimple Kapadia Bags a Role in Christopher Nolan's Next Staring Michael Caine and Robert Pattinson.

According to a report in Mirror, the Academy Award winning filmmaker Christopher Nolan was in Mumbai in the last few months to do site inspections where Tenet could be filmed. A source revealed to the tabloid, “Nolan was in Mumbai last year for an event hosted by Film Heritage Foundation’s Shivendra Singh Dungarpur on the need to promote the use, restoration and preservation of films. During his four-day stay he decided to shoot here, and in September will mostly be filming in South Bombay, around the Gateway of India, the Taj Mahal Hotel and the Colaba Market. For the recce, he was accompanied by production designer Nathan Crowley and cinematographer, Hyote Van Hoytema among other team members with Shivendra helping them scout for locations too.” Dimple Kapadia in Christopher Nolan's Tenet: Here are 5 Performances of the Bollywood Actress That Prove Why She Deserves All the Attention!

Talking about Dimple Kapadia’s role in Tenet the source further mentioned, “Dimple plays a 60-plus lady who has a crucial role in the narrative. Her readings were done at a Sobo hotel.” It is also reported some of the Hollywood actors are also expected to be present in Mumbai for the shoot. Tenet includes John David Washington in the lead and Robert Pattinson, Elizabeth Debicki, and many others in the supporting role. The film is slated to hit the big screens next year.

(The above story first appeared on LatestLY on May 30, 2019 08:28 AM IST. For more news and updates on politics, world, sports, entertainment and lifestyle, log on to our website latestly.com).