The Courier: Benedict Cumberbatch’s Film Is All Set to Release on March 19 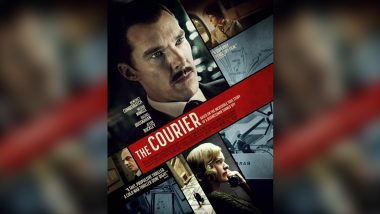 The Courier, starring English actor Benedict Cumberbatch, will release on March 19. Co-starring Marvelous Mrs Maisel actress Rachel Brosnahan, the film follows the life and times of a normal British businessman, whose world is turned upside down when he is recruited as a covert spy during the dreaded Cold War. ‘Reminiscence’: Hugh Jackman’s Action-Thriller to Release in Theatres and HBO Max on September 3, 2021.

The Dominic Cooke directorial has received accolades at the Sundance Film Festival, with praise being showered on Benedict's portrayal of a common man stuck in a dilemma. Warner Bros’ ‘Tom & Jerry’ Movie Set to Release in India in English, Hindi, Tamil and Telugu.

The film also features Merab Ninidze and Jessie Buckley among others.

(The above story first appeared on LatestLY on Feb 23, 2021 01:47 PM IST. For more news and updates on politics, world, sports, entertainment and lifestyle, log on to our website latestly.com).