Kapil Sharma Celebrates His Birthday in Advance with Mother and Team Members on the Sets of the Kapil Sharma Show, See Pics

The birthday celebrations of comedy maestro Kapil Sharma took an early start on the sets of The Kapil Sharma Show. 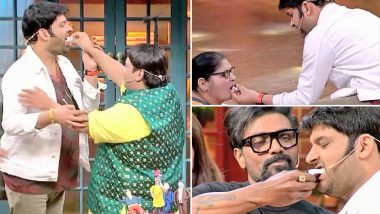 Comedy maestro Kapil Sharma celebrates his birthday on April 2. However, the birthday celebrations took an early start on the sets of The Kapil Sharma Show. The pictures from the bash flooded the internet, as several fan clubs shared a series of pictures. The birthday boy was looking dashing, as always, in a white jacket and camouflaged tee. In the pictures, Kapil can be spotted feeding the cake to his mother and other team members. However, what appeared to be the show stealer of the celebration, was the customised birthday cake, that featured all the characters from his popular show. Learnt a Lot from Failure: Kapil Sharma.

Well, going by the pictures, it seems that the cast had a gala time. Have a look at the pictures taken at the celebrations:

This birthday will have a special treat for Kapil, as the new season of the Kapil Sharma Show is basking on success and it is also his first post his wedding with Ginni Chatrath in December 2018.

On the show front, tonight’s episode of TKSS will feature yesteryear ladies Asha Parekh, Helen, and Waheeda Rehman, who will make a special appearance on the show. The upcoming episode is going to be roller coaster fun-filled laughter riot as the beauties will share the tidbits from their journey in the showbiz world.

Have a look at the beautiful picture from tonight’s episode:

We wish Kapil Sharma a Happy Birthday in advance and may his birthday bring lots and lots of fun-filled surprises for the comedy maestro.

(The above story first appeared on LatestLY on Mar 30, 2019 06:26 PM IST. For more news and updates on politics, world, sports, entertainment and lifestyle, log on to our website latestly.com).