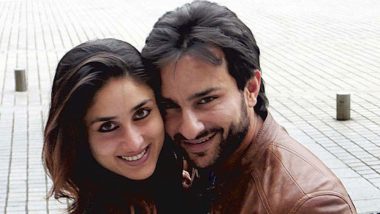 Kareena will be making a cameo in Jawaani Jaaneman, we hear

To the fans of Saif Ali Khan and Kareena Kapoor Khan, who have been waiting to see them together in a film, here's some good news. Looks like it's finally happening! The power couple of Bollywood might just end up sharing screen space. Saif and Kareena are currently in London as the former is shooting for his upcoming film, Jawaani Jaaneman. Word has it that Kareena is there not just for a vacation. It seems she has a role in the film as well.

According to BollywoodLife, Kareena will make a cameo in Jawaani Jaaneman. The report further states that Kareena will play the ex-wife slash ex-girlfriend to Saif's character. Needless to say, if it's Kareena, who is making a special appearance, it will be a prominent one. This will be the second time that Kareena will be making a cameo in her husband's film. Last time, it happened in 2013 in the film, Happy Ending. Kareena Kapoor Khan and Taimur Enjoy a Lazy Evening with Karisma Kapoor in London (View Pic).

So while we wait for an official announcement or a picture of them together from the sets of the film, let's relive the time when Kareena made a special appearance in Happy Ending. Watch this glimpse of her cameo right here:

Notice how in Happy Ending too, Kareena played one of Saif's ex-girlfriends. Looks like it's going to be the same in Jawaani Jaaneman, but we are definitely not complaining. Jawaani Jaaneman will also feature Tabu. Saif will be seen playing a 40-year-old man child in the film.

(The above story first appeared on LatestLY on Jun 18, 2019 04:31 AM IST. For more news and updates on politics, world, sports, entertainment and lifestyle, log on to our website latestly.com).