Adipurush: Alia Bhatt, Anushka Shetty or Keerthy Suresh - Who Would You Like to See in Prabhas' Next with Om Raut? Vote Now

Prabhas has been announced as the lead of Adipurush but there's no mention of his leading lady. While makers are busy contemplating different names, we have our personal recommendations that fans would approve of. 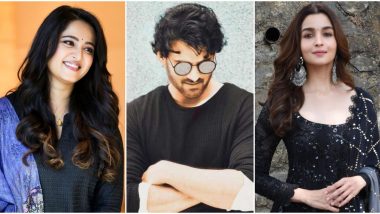 Who should star opposite Prabhas in Adipurush? (Photo Credits: Instagram)

Prabhas' next big project is Adipurush with Tanhaji director, Om Raut. The actor is striving hard to blur the lines between regional and Hindi releases and is certainly emerging as the first Pan-India star. After the huge success of SS Rajamouli's Baahubali, Prabhas went on to become a household name and what followed next was a steep and steady rise in his popularity. After releasing Saaho across the nation, the actor is looking forward to dominating the box office with all of his upcoming projects. From Radhe Shyam to Adipurush - Here's Looking at Prabhas' Promising Future Releases.

We know he's romancing Pooja Hegde in Radhe Shyam and has collaborated with Deepika Padukone for Nag Ashwin's next but there are no additional details available on Adipurush. While producer Bhushan Kumar has assured to rope in a big name as the antagonist in the film, there's no mention about the actor's leading lady anywhere. The chances of Adipurush makers omitting the actress' role completely are very bleak and the project has to have a leading lady. Who do you think will and should come on board for it? Hear out our recommendations...

'Cos why not? We know the Anushka and Prabhas' pairing was praised immensely in Baahubali and fans are even rooting for them to come together in real life. They already worked in a period drama so a second attempt, ideally, shouldn't worry them. Prabhas Has THIS to Say About His Relationship With Anushka Shetty and all the Marriage Rumours Surrounding Them.

Though Alia has multiple projects in her kitty, there are reports of how Takht has been put on a backburner for now. This Karan Johar directorial was a period drama set during the Mughal era. And with Takht reportedly getting delayed, Alia will have a chunk of dates that she can allot to a new project. Moreover, the actress is already sharing the screen space with Ram Charan in Rajamouli's RRR so there's no reason why she would hesitate in signing another regional release with Prabhas.

Remember Keerthy Suresh was supposed to make her Bollywood debut with Ajay Devgn's Maidaan. While she decided to exit the project, she's still looking forward to signing something prominent as her B-town debut. And what better than Prabhas' Adipurush that'll help her have a Pan-India recognition. Also, bagging a National Award may work in her favour.

Kiara's the name working with every prominent production house these days. She's on a signing spree and her recent announcement came with Varun Dhawan for Dharma Productions' next romantic dramedy. While the chances of Kiara bagging this film are very bleak, we haven't lost our hopes altogether. She has previously worked with Mahesh Babu in Bharat Ane Nenu and hence Prabhas could be next on her wishlist.

Kriti has recently tried her hand at historical releases with Ashutosh Gowariker's Panipat and she looked quite convincing. Also, her fresh pairing with Prabhas wouldn't be disappointing and she's certainly a name we'd like to see opposite Prabhas.

Who Should Star Opposite Prabhas in Adipurush?

Go ahead, vote for your favourite name and we'll return with results shortly.

(The above story first appeared on LatestLY on Aug 18, 2020 09:27 AM IST. For more news and updates on politics, world, sports, entertainment and lifestyle, log on to our website latestly.com).