Kannada Actor Lakshman Dies at 74 Due to Massive Heart Attack

Veteran Kannada actor Lakshman unfortunately died due to a massive heart attack at the age of 74. He was complaining of chest pains before his death and was brought back after ECG tests. He died of a heart attack on January 23. He acted in more than 200 Kannada films, making a mark with his versatility. 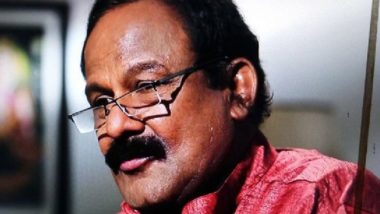 Veteran Kannada actor Lakshman passed away on Monday following a heart attack at his residence in Bengaluru. The 74-year-old Lakshman complained of heart pain and was taken to the hospital on Sunday night. Later, he was brought back after ECG tests. However, Lakshman died after a massive heart attack in the wee hours of Monday. Singer Mangli Denies Rumours of Being Attacked During an Event in Ballari, Calls It As ‘Fake News’.

His body is kept at his residence for antim darshan. Lakshman had acted in more than 200 Kannada films as a senior artiste and made his mark as an actor in various shades of characters. Lakshman had acted with all top actors of Kannada film industry including late Dr Rajkumar, late Ambareesh, late Vishnuvardhan, late Shankar Nag and others.

(The above story first appeared on LatestLY on Jan 23, 2023 04:43 PM IST. For more news and updates on politics, world, sports, entertainment and lifestyle, log on to our website latestly.com).