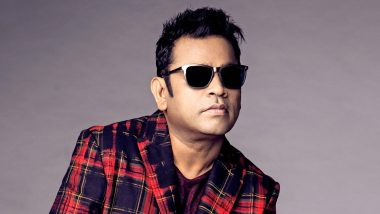 Music maestro has fallen into a legal trouble over Income Tax evasion. As per the latest reports, The IT department moved to Madras High Court accusing that the singer-composer has routed his income to evade tax of over Rs 3 crore through his charitable trust, 'A R Rahman Foundation.' Division bench of Justice TS Sivagnanam and Justice V Bhavani Subbaroyan ordered notice to the singing icon after they admitted the appeal made by the department. ‘Atkan Chatkan’: Amitabh Bachchan Sings in Musical Film Presented by AR Rahman.

"The income, which is taxable, must be received by Rahman. After due deduction of tax, it can be transferred to the trust. But the same cannot be routed through the trust as income to the charitable trust is exempted under the Income Tax Act,” said senior standing counsel for the income tax department T R Senthil Kumar as quoted by TOI.

The counsel added that AR Rahman received worth income Rs 3.47 crore in the assessment year 2011-12 in connection for an agreement made with UK-based Libra Mobiles. The three-year contract to make exclusive ringtones for them reportedly had it in written that Rahman wanted the remuneration directly paid to the foundation.

(The above story first appeared on LatestLY on Sep 11, 2020 12:35 PM IST. For more news and updates on politics, world, sports, entertainment and lifestyle, log on to our website latestly.com).