Nandamuri Balakrishna Fans Shower Birthday Wishes on the Actor A Day Prior to Birthday, Trend '#HappyBirthdayNBK'

Actor Nandamuri Balakrishna who turns 60 on June 10, has a tweet fest going on, on twitter for him, as fans flocked online to wish him on his birthday, a day in advance with the twitter trend '#HappyBirthdayNBK'. 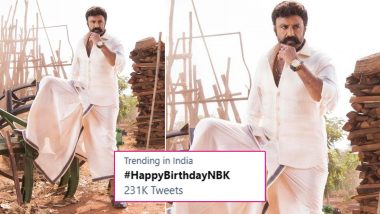 It is a well-known fact that fans of South superstars are very very passionate for their idols, and some even got to the extent of bashing other actors' fans. However, they never fail to celebrate their favourite star's special moments with gusto and enthusiasm. And this includes wishing their idol a day in advance for their birthdays. And actor Nandamuri Balakrishna, who has been a top star in the Telugu film industry for 46 years now, is experiencing a similar moment now. NBK 106 First Look Teaser: Nandamuri Balakrishna's Badass Action Avatar is the Perfect Treat for Fans Ahead of the Superstar's Birthday (Watch Video).

The actor who turns 60 on June 10, has a tweet fest going on on twitter for him, as fans flocked online to wish him on his birthday, a day in advance with the twitter trend '#HappyBirthdayNBK'. In fact, the makers of his next NBK106, launched his next film #BB3's first look which seen Balakrishna battling bad guys in a lungi. NBK 106 First Look Starring Nandamuri Balakrishna to Be Released on the Eve of Superstar’s Birthday; Fans Trend #BB3Roar on Twitter.

God of mass, I don't think there is any change in this picture and today's picture,

From Mahesh Babu Fans To Balakrishna:

A King and An Icon:

NBK was never a torch bearer He's Free spirited King in his own way&where ever he is Icon bulit by fans & public, Neither fake/management#HappyBirthdayNBK#JaiBalayya pic.twitter.com/yodkm3YD3o

He never fake his smile ❤️ either records 🤞 🔥🔥#HappyBirthdayNBK pic.twitter.com/Q5PDzwRUbq

Wishing our #NandamuriBalakrishna garu a very happy birthday on completing his 60 years.

Here is a small Tribute from us to this #Legend#HappyBirthdayNBK

He believes Politics is not about money but serving people ..

As a believer in God his philosophy is simple .. be true to yourself ..be out there and be the blessing for the less privileged.

He is a master in the art of balancing movies and political career.#HappyBirthdayNBK pic.twitter.com/f6SKg62DKX

One From Thalapathy Fans To Balakrishna:

NBK 106 is Balakrishna and Boyapati Srinu's third venture together and is being produced by Miryala Ravinder Reddy under the banner of Dwaraka Creations. Stay tuned for more updates!

(The above story first appeared on LatestLY on Jun 09, 2020 08:09 PM IST. For more news and updates on politics, world, sports, entertainment and lifestyle, log on to our website latestly.com).