Pa Ranjith has helmed rom-com, political and gangster dramas and other genres with ‘multi-dimensional background’ and they indeed have had a strong impact on the audience. On the occasion of his birthday, let’s take a look at the five films that were written and directed by him. 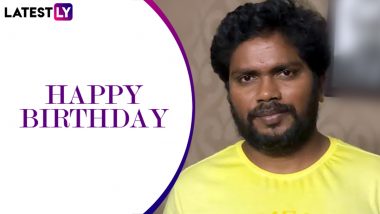 Pa Ranjith has written and directed five films ever since he made his directorial debut. But all these fives his films have not just become the talk of the town, but even smashed records at the box office. He has conveyed strong, influential messages through cinema. He brings up ongoing social concerns through his films by using symbolism. Films such as The Battle of Algiers and City of God has had a huge impact in his way of thinking about the world of cinema. Ranjith, who had made his directorial debut in 2012, has turned 39 on December 8. And by doing just a handful of projects, he has managed to leave an impressive remark on the audience. Sarpatta Parambarai Director Pa Ranjith Feels OTT Platforms Are Creating a ‘New Wave’ of Indian Cinema.

Pa Ranjith has helmed rom-com, political and gangster dramas and other genres with ‘multi-dimensional background’ and they indeed have had a strong impact on the audience. On the occasion of his birthday, let’s take a look at the five films that were written and directed by him.

Attakathi – Ranjith had made his directorial debut with this rom-com starring Dinesh, Nandita Swetha and Aishwarya Rajesh. An ordinary storyline that was a built in the most refreshing manner.

Madras – Starring Karthi in the lead, the film was about a dispute over a political text that was scripted on wall in North Chennai. It also showcased how the area’s political rivalry affects the people living there.

Kabali – The gangster drama featuring Rajinikanth in the lead had turned out to be a mass film for the superstar’s style, dialogues and action sequences were totally loved by the audience.

Kaala – Ranjith and Rajinikanth collaborated once again for an action drama and for the unversed, it is the first Indian film ever to be released in Saudi Arabia. This was another socio-political film that had a huge impact on movie buffs.

Pa Ranjith is now all set to team up with Chiyaan Vikram for his 61st film that is tentatively titled as #Chiyaan61. The film will be produced under the banner of Studio Green. We just can’t wait to hear more details about the film. Here’s wishing ace filmmaker Pa Ranjith a very happy birthday and a wonderful year ahead with another intriguing project.

(The above story first appeared on LatestLY on Dec 08, 2021 08:40 AM IST. For more news and updates on politics, world, sports, entertainment and lifestyle, log on to our website latestly.com).