Was Rajinikanth’s Thalaivar 168 the Reason behind Keerthy Suresh Walking Out Of Mani Ratnam’s Ponniyin Selvan?

Ponniyin Selvan is a mega budget film that stars Aishwarya Rai Bachchan, Chiyaan Vikram, Jayam Ravi, Karthi among others in the lead. The shooting of the film has started in Thailand. 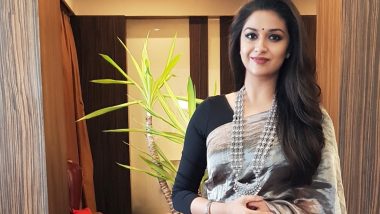 Keerthy Suresh is one of the most sought after actresses down south. The projects that she has in her kitty are intriguing. One among them is Maidaan, which marks her debut in Hindi cinema. The National Award-winning actress who signed multi-starrer films has opted out of one of the projects and that is Mani Ratnam’s Ponniyin Selvan. And as per reports, she has walked out of the project for Rajinikanth’s upcoming flick Thalaivar 168. Thalaivar 168 Cast: Meena, Keerthy Suresh, Khushbu Join Rajinikanth Starrer; View Pics from Puja Ceremony.

Two days ago the team of Thalaivar 168 confirmed that Keerthy Suresh has been roped in for filmmaker Siva’s directorial. Not only that, this is the first time that she would be working with superstar Rajinikanth. But rumours are rife that she had to choose among the multi-starrer Ponniyin Selvan and Thalaivar 168. Keerthy had reportedly agreed to do both the films, however she backed out of Ponniyin Selvan after shooting of the film got delayed. Apparently, she tried her best to adjust with the dates, but had to choose just one of the films and she gave a nod for Thalaivar 168. Vikram Prabhu, Karthi, Aishwarya Rai Bachchan, Keerthy Suresh Come Together for Mani Ratnam’s Ponniyin Selvan?

Extremely happy to announce this magical milestone in my journey. From being awe struck of @rajinikanth sir to sharing screen space with him will be my most cherished memory in my life. Thank you #DirectorSiva sir, it is a pleasure to work with you once again @sunpictures 😊🙏🏻 #Thalaivar168 @immancomposer

Ponniyin Selvan is a mega budget film that stars Aishwarya Rai Bachchan, Chiyaan Vikram, Jayam Ravi, Karthi among others in the lead. Bankrolled by Lyca Productions in association with Madras Talkies, the shooting of the film has started in Thailand. Karthi and Jayam Ravi would be in the first part of the schedule, which is expected to go on for 40 days. Chiyaan Vikram will start shooting for Ponniyin Selvan once he completes the filming of Chiyaan 58. Stay tuned for more updates from the world of entertainment.

(The above story first appeared on LatestLY on Dec 12, 2019 11:47 AM IST. For more news and updates on politics, world, sports, entertainment and lifestyle, log on to our website latestly.com).