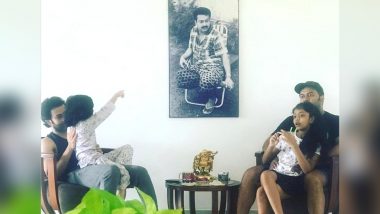 On Monday, Prithviraj Sukumaran tweeted a picture which is all about family. Captioning it as '3 generations. Family weekend,' the Malayalam star shared a photo which sees him along with his daughter and elder brother Indrajith. However, the highlight of the pic was his late father, Sukumaran's portrait in the backdrop. And that's why the star tagged it as the picture flashing three generations in one frame. In the shared tweet, we can see the South star's fam having a gala time with each other.  Vaariyamkunnan: Prithviraj Sukumaran Teams Up With Virus Director Aashiq Abu For Movie Based On 1921 Malabar Rebellion - Read Deets.

The shared photo is indeed beautiful and highlights how Prithviraj balances his past as well as the present. The past is his dad and the present is his current family. The love of the actor for his family can be seen in the pic itself. For the unversed, Prithviraj's father, Sukumaran was a well-known face from the 90s where his acting career spanned for more than two decades. Lucifer: When Prithviraj Sukumaran Threw in a Rajinikanth and Ajith Kumar Reference in Mohanlal’s Political Thriller (SPOILER ALERT).

Meanwhile, on the work front, Prithviraj Sukumaran has a few projects in his kitty. Kaduva, L2: Empuraan and Kaaliyan are the names of the few films, the South actor will be soon working on. Coming back to his latest tweet, looks like it's family time done right over the weekend. Stay tuned!

(The above story first appeared on LatestLY on Jun 29, 2020 02:43 PM IST. For more news and updates on politics, world, sports, entertainment and lifestyle, log on to our website latestly.com).