The singer's loss has certainly come as a huge blow to his fans. SP Balasubrahmanyam remained a famous a voice not only in the South industry but also in Bollywood. 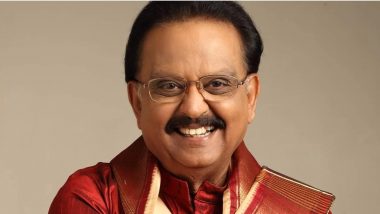 Legendary singer SP Balasubrahmanyam passed away on Friday, September 25 in Chennai. The veteran singer had been hospitalised for weeks after first testing positive for COVID-19 and later despite coronavirus recovery, his condition remained critical as he was put on a ventilator. The singer's son, SP Charan, addressed the media and said, "My dad breathed his last at 1:04 pm. Thank you everyone for your prayers. My dad will live long till his fans remember him." The singer's loss has certainly come as a huge blow to his fans. SP Balasubrahmanyam remained a famous a voice not only in the South industry but also in Bollywood. SP Balasubrahmanyam, Popular Singer and Actor, Dies At 74.

SP Balasubrahmanyam lent his voice for several songs of Salman Khan and other major actors. He will always be remembered for his iconic songs such as "Maine Pyaar Kiya" title song, A R Rahman's famous composition "Roja" and several others. Twitterati have been mourning the loss of this legendary singer, a voice that enthralled generations. In a career spanning over five decades, he had recorded over 40,000 songs in several languages. The melodious voice of SP Balasubrahmanyam will always remain in our hearts as we remember him through his musical legacy. Here's a look at how fans are reacting to this major loss.

Will Forever Miss This Soulful Voice

#RIPSPBalasubrahmanyam Sir. The colours you filled in the dreams of the teens with your ever soulful and youthful voice, will now linger in silence.

Thank You For Those Evergreen Classics

A Huge Loss to Our Music Industry

Another Legend Passes Away

One more legend passes away due to #COVID19.. 😞

Each day has become a nightmare this year!!!

He has left a huge legacy behind him..

SPB Will Remain In Our Hearts

SP Balausbrahmanyam's massive contribution to the Indian music industry will always be remembered and cherished by the singer's fans. The veteran will live through his melodious voice in our hearts. We pay our deepest condolences to the singer's family and hope they find strength in this trying time.

(The above story first appeared on LatestLY on Sep 25, 2020 02:05 PM IST. For more news and updates on politics, world, sports, entertainment and lifestyle, log on to our website latestly.com).