Veteran singer SP Balasubrahmanyam who had been hospitalised at the MGM Healthcare in Bengaluru, since August 5, 2020, passed away on September 25, 2020. He was 74 at the time of his death. 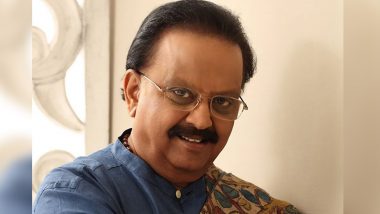 Veteran singer SP Balasubrahmanyam who had been hospitalised at the MGM Healthcare in Chennai, since August 5, 2020, passed away on September 25, 2020. He was 74 at the time of his death. He had tested positive for COVID-19 and was admitted to the hospital with mild symptoms. However, he was moved to the ICU after his health deteriorated. And even though he recently tested negative for COVID-19, his health condition remained critical. SP Balasubramanyam Health Update: Singer Placed on Maximum Life Support After Condition Deteriorates, Fans Pray For His Quick Recovery (View Tweets).

In fact, there were quite a few improvements in his health. On September 20, his son SP Charan had revealed that his father had completed one round of physiotherapy and had also begun his oral intake of food. However, the hospital, in its health update of the actor, had revealed that he was extremely critical and had been placed on maximal life support, on September 24, 2020. Together As One: AR Rahman Releases Independence Day Special Track With 65 Singers Including SP Balasubrahmanyam, Hariharan, Shankar Mahadevan (Watch Video).

SP Balasubrahmanyam's body will be kept at a farmhouse near Satyam theatre on Mount Road for his fans to pay their respects.

As soon as news of SP's condition deteriorating had become public, lot of his ardent fans and well-wishers had taken to Twitter to offer prayers for his quick recovery. Balasubrahmanyam is considered one of the most iconic playback singers in the history of the entertainment scene in India, having crooned hit numbers not only in Telugu but also Hindi, Kannada, Tamil and Malayalam. His passing away is indeed a huge and irreparable loss to the nation. Our deepest condolences are with Sp's family in these tough times. May his soul rest in peace.

(The above story first appeared on LatestLY on Sep 25, 2020 01:26 PM IST. For more news and updates on politics, world, sports, entertainment and lifestyle, log on to our website latestly.com).