The veteran actor had been ailing for some time. The Tamil Nadu Nadigar Sangam (actors association) announced the passing away of the actor. 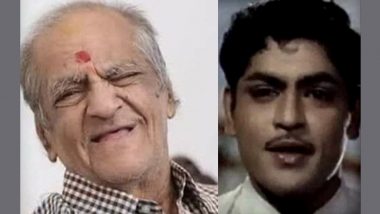 Srikanth, who was famous for being the first celluloid hero of the late former Tamil Nadu Chief Minister J. Jayalalithaa, passed away here on Tuesday late evening. He was 82. The veteran actor had been ailing for some time. The Tamil Nadu Nadigar Sangam (actors association) announced the passing away of the actor. Srikanth shared screen space with Jayalalithaa in the 1965 movie, 'Venniara Aadai'. He was the hero of K. Balachander classics such as 'Bama Vijayam', 'Poovaa Thalaiyaa' and 'Ethir Neechel'. Nedumudi Venu, National Film Award-Winning Malayalam Actor, Passes Away At 73.

He donned the role of a comedian in movies like 'Kassethan Kadavuleda' and played the lead character in more than 50 movies. He later went on to become one of the most sought-after villains of Tamil cinema. He was the villain in 'Bhairavi', which was the debut movie of Superstar Rajanikanth as a hero. Srikanth is remembered as an actor who did not stick to the role of a hero and instead played all characters he was offered. He played the hero, villain, comedian and acted in character roles as well. Satyajith Passes Away at 72; Veteran Kannada Actor Was Known for Films Like Putnanja, Apthamitra Among Others.

Condoling the passing away of Srikanth, Tamil Nadu Chief Minister M.K. Stalin said he was a natural actor and his performances in movies such as 'Bhairavi' and 'Thanka Pathakam' were exemplary. Striking a personal note, Stalin said he enjoyed a personal rapport with Srikanth as they were neighbour Former chief ministers O. Panneerselvam and Edappadi K. Palaniswami also condoled the passing away of the veteran multi-talented actor.

(The above story first appeared on LatestLY on Oct 13, 2021 10:21 AM IST. For more news and updates on politics, world, sports, entertainment and lifestyle, log on to our website latestly.com).