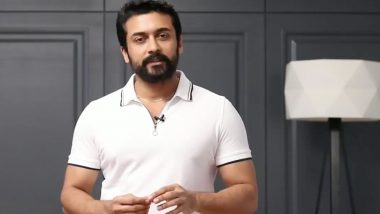 Suriya has found support from 25 Madras High Court lawyers after his comments on centre conduction NEET despite pandemic irked many. A Madras High Court Judge, SM Subramaniam, had sought that 'contempt of court' proceedings against the actor. Now, 25 judges including top names like NGR Prasad & Sudha Ramalingam have written to Chief Justice AP Sahi saying that initiation of court proceedings against Suriya will be against freedom of speech and expression guaranteed to every citizen by the constitution of India. "Of late, every criticism of the Judiciary is being seen as contemptuous," the letter reads. Suriya To Be Held In Contempt of Court Over NEET Exams and Virtual Court Hearings Comment?

"The Supreme Court too has held that dissent is the safety valve of democracy. In a democratic country governed by the rule of law, there should be space for a wide array of opinions on any issue. We, therefore, request your Lordship not to initiate contempt and thereby, uphold the majesty of the law and of Courts," the letter added. Suresh Raina Finds Support From Dulquer Salmaan and Suriya Sivakumar After His Family Got Attacked In Pathankot.

Earlier, Judge Subramaniam had written that Suryia's statement "amounts to contempt of court as the integrity and devotion of the honourable judges as well as the judicial system of our great nation are not only undermined but criticised in bad taste, wherein there is a threat to the public confidence on the judiciary."

Check Out The Letter Here:

My heart goes out to the three families..! Can't imagine their pain..!! pic.twitter.com/weLEuMwdWL

"My conscience is shaken after three students killed themselves over the fear of NEET exam. It brings so much pain when students are forced to write an exam even at the time of a life-threatening pandemic," Suriya said in the statement that started this legal battle.

Suriya has been vocal about various issues in the past. He was one of the rare actors from South India who tweeted support for cricketer Suresh Raina after his relatives were fatally attacked in Pathankot.

(The above story first appeared on LatestLY on Sep 14, 2020 06:16 PM IST. For more news and updates on politics, world, sports, entertainment and lifestyle, log on to our website latestly.com).