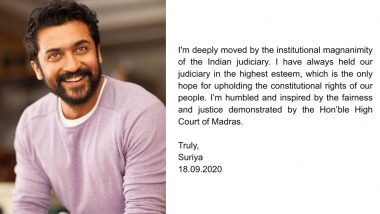 The Madras High Court, on Friday, dismissed a petition of one of SM Subramaniam who sought that 'contempt of court' proceedings be initiated against the actor after he called out courts for making students appear physically for NEET while they held their proceedings virtually because of COVID-19. Suriya, last week had taken to social media to condemn the death of four NEET aspirants and had lashed out at the judiciary system. His letter on Twitter earned the ire of a Madras High Court Judge who appealed to Chief Justice of Madras, Amreshwar Pratap Sahi 'insisting on the need to initiate suo moto criminal contempt of court proceedings' against the actor. Suriya To Be Held In Contempt of Court Over NEET Exams and Virtual Court Hearings Comment?.

However, the latest update in the case came in the form of the Madras High Court dismissing the petition, while it did call Suriya's comments as "unnecessary and unwarranted". "The utterances by the cine actor are unnecessary and unwarranted for being ignorant of the manner in which the entire judiciary of this state has served the interest of it's citizens he state has been serving during this pandemic ...," the court said. After the judgement, Suriya took to Twitter to express his gratitude and thanked the judiciary system. Suriya Gets Support From 25 HC Lawyers After Legal Action Threatened by Judge Over Actor's Comments on NEET.

In fact, even before the hearing, Suriya had found the support of 25 High Court judges, who in a letter to Chief Justice Amreshwar Pratap Shahi wrote, "Of late, every criticism of the Judiciary is being seen as contemptuous,” the letter reads. The Supreme Court too has held that dissent is the safety valve of democracy. In a democratic country governed by the rule of law, there should be space for a wide array of opinions on any issue. We, therefore, request your Lordship not to initiate contempt and thereby, uphold the majesty of the law and of Courts." Well, all's well that ends well.

(The above story first appeared on LatestLY on Sep 18, 2020 11:58 PM IST. For more news and updates on politics, world, sports, entertainment and lifestyle, log on to our website latestly.com).