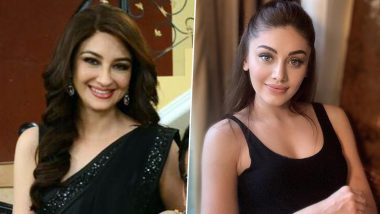 Rumours had it that Saumya Tandon aka Anita from Bhabiji Ghar Par Hain has decided to quit the comedy show. A few reports mentioned that the actress is dicey of returning back to the drama due to the pandemic and also because her personal hairdresser had tested positive for coronavirus. With this, speculations also were that Saumya will be replaced by Bigg Boss 13 contestant Shefali Jariwala. However, looks like that's not the reality. As refuting the rumours, show's producer Binaifer Kohli mentioned that Saumya is still the part of the show. Shefali Jariwala To Replace Saumya Tandon in Bhabiji Ghar Par Hain?

Talking to TOI, Kohli said, “I don’t know where these rumours are coming from. I have not spoken to Shefali Jariwala or anyone. Saumya Tandon is currently shooting for the show. As of now she is very much a part of Bhabhiji Ghar Par Hain and will be shooting with us. Saumya is a good artist, I love her, she is very professional. If I had my way I would have never let her go.”

Earlier, in an interview with Spotboye, even Shefali had said, "It’s not at all true. I really don’t know how my name came into the picture when there has been no discussion at all.” Bhabiji Ghar Pe Hai’s Aasif Sheikh, Saumya Tandon’s Heartwarming Poem Recital Video in the Times of COVID-19 Is a Must Watch.

Saumya in one of her interviews with TOI had also talked about pay cuts, she had said, "It's not just me, it has happened with everybody. It's not in just our industry, it is happening everywhere. It is for the work that is to be done for the future, it is not for the work which we have already done for which the payments are pending. But whatever we shoot in the future because the entire TV industry has to go through some cuts seeing the economy has been shaken up not just in our country, but across the globe." Stay tuned!

(The above story first appeared on LatestLY on Jul 24, 2020 11:50 AM IST. For more news and updates on politics, world, sports, entertainment and lifestyle, log on to our website latestly.com).