And while all was well in the PaHira universe, Paras' ex and BB14 contestant Pavitra Punia's claims of her ex opened a can of worms. And bestie Mahira Sharma has come to the rescue. 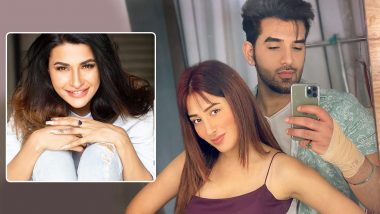 Bigg Boss 13 gave the world two besties- Paras Chhabra and Mahira Sharma. In fact, the duo is so tight that many suspect them to be dating IRL. In fact, their close bond led to Paras eventually breaking up with his girlfriend Akanksha Puri as well. And while all was well in the PaHira universe, Paras' ex and BB14 contestant Pavitra Punia's claims of her ex opened a can of worms. And bestie Mahira Sharma has come to the rescue. Bigg Boss 14: Paras Chhabra Hits Back at Ex-Girlfriend Pavitra Punia, Reveals She Was Married to Someone Else.

In one of her interviews, Pavitra revealed that Paras was the biggest mistake of her life. To this, Paras lashed out and revealed that Pavitra was married when they were dating and she had hid the fact from him. And now, Paras' rumoured girlfriend and confirmed bestie Mahira Sharma has stood up for the hunk. Bigg Boss 13 Fame Paras Chhabra and Mahira Sharma Get Matching Tattoos (View Pic).

"I have always stood for what is right. I would have supported her as a friend still but she is taking the route of lies and deceit. I don't understand why these girls are after Paras to get fame? During Naagin 3, I knew she was married and at that time she was dating Paras and somebody else too. She was three timing and now she is blaming Paras for it, just because you are a women you can’t play the victim card. Stop blaming Paras for your shortcomings," said an angry Mahira to ETimes TV. Angry Paras Chhabra Lashes Out At Shehnaaz Gill's Father For Making Fun Of His Bald Patch, Asks Santokh Singh Sukh to 'See Himself In The Mirror'.

In fact, Mahira has also revealed that if she will ever get a chance to enter the Bigg Boss 14 house, she will be sure to ask Pavitra about her claims. "I will confront her in Bigg Boss 14 if I get a chance. I need to bring the truth out. As a woman I understand Paras' integrity. Women can’t keep crying always. Own up to the truth," says Mahira.

She did not stop there, "Stop playing an abla nari, because you are not. Dating two men and being married to one, three timing and blaming Paras. Wow. Scandal is your second name, controversy is your 24/7 mood. Such is your personality. If at all I enter Bigg Boss, I will make sure the world knows the truth."

(The above story first appeared on LatestLY on Oct 05, 2020 10:15 PM IST. For more news and updates on politics, world, sports, entertainment and lifestyle, log on to our website latestly.com).