Bigg Boss 13 darlings, Mahira Sharma and Paras Chhabra made many heads turn with their on-off chemistry on the show. Now, the two flaunt matching tattoos. Read on. 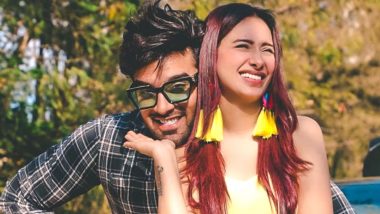 Bigg Boss 13 darlings, Mahira Sharma and Paras Chhabra made many heads turn with their super chemistry on the show. Call it a TRP stunt or a real connection, it worked in favour of the reality show and also for the pair. As it's the Salman Khan hosted show which made a household name. Rumours of the two dating each other have also popped a lot of times. However, the two have denied the same and termed themselves as 'just friends'. Their fans love them a lot and have gifted them a name which is #PaHira. Having said that, we've come to know that after Bigg Boss, there's another thing which is common between the two, and it's tattoos. Paras Chhabra Erases Akanksha Puri's Tattoo From His Wrist, Says 'Finally Bye Bye To Negativity' (View Post).

Yep, Paras and Mahira now have the same tattoo. For the unversed, it was Chhabra who got his ex Akanksha Puri's name eliminated from his wrist and redesigned his tattoo to that of a Bigg Boss eye. And now even Mahira has a ditto tattoo. The pictures of their inked wrists is all over the internet wherein Mahira can be seen sitting comfortably and getting the flamy eye design done on her hand. Bigg Boss 13: Paras Chhabra’s Ex Akanksha Puri Gets Rid of Her Wrist Tattoo of His Name; Gives It a ‘Being Me’ Twist.

Check Out Paras And Mahira's Picture Below:

Earlier, in an interview with Times of India, after saying bye to ex Akanksha’s name from his wrist, Paras had said, “I want to break free from my previous relationship and any memory attached to it. That’s why I decided to modify the tattoo. I don’t think I will get a name inked on my body anymore." Stay tuned!

(The above story first appeared on LatestLY on Jul 17, 2020 06:39 PM IST. For more news and updates on politics, world, sports, entertainment and lifestyle, log on to our website latestly.com).