Bigg Boss 14: Paras Chhabra Hits Back at Ex-Girlfriend Pavitra Punia, Reveals She Was Married to Someone Else

Bigg Boss 14 contestant Pavitra Punia had said some unsavoury things about Paras in an interview, right before entering the house. Paras has now turned the tables on her and called her out for getting in a relationship with him while she was married to someone else. 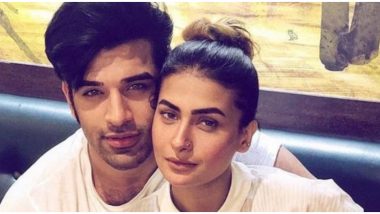 Baalveer Returns actress Paavitra Punia is the new contestant on Bigg Boss 14. The actress is not eager to look for love on the show, as she told us in an interview. The actress has had a controversial romantic past with Paras Chhabra, who was a part of Bigg Boss 13. The actress had said some unsavoury things about Paras in an interview, right before entering the house. Paras has now turned the tables on her and called her out for getting in a relationship with him while she was married to someone else. Yes, as per Paras, the actress was secretly married to someone. Bigg Boss 14 Contestant Pavitra Punia: 'I'll Be The Kaam Wali Baai Of The House' [Exclusive].

Paras said in an interview, with an entertainment portal, "Pavitra is an ex. A scandalous ex who lied about her relationship status. I got into a relationship with no idea that she was already married to an influential person from a very influential media house. I got to know much later from a friend, confronted her and immediately called it off. In fact, I came to know much more. If I put it correctly, she was a BIG BIG mistake. Such is her personality"

"Her need and want to be in the news is getting out of hand. Passing senseless comments to make headlines is disgusting. Entering or not entering the Bigg Boss house is my personal decision which has nothing to do with her. But I swear if at all I enter, I will make sure that I expose her," Paras threatened. Bigg Boss 14: 'Sara Gurpal Married Me for US Citizenship', Claims Punjabi Singer Tushar Kumar.

Often makers bring exes of current contestants on the show as guests to spice up things. Pavitra is not excited about seeing Paras on the show. She said in an interview, "I don’t really have that much of a controversial past. I just have one ‘sh*t’ in my life and if he has even a bit of self-respect and sense left, he will not enter the Bigg Boss 14 house in my presence and even if he does, he shouldn’t rub me the wrong way or else he would face the dire consequences."

Pavitra is not the only one whose marital status is in question right now. Tushar Kumar has claimed that Sara is lying about her relationship status, as she married him for acquiring a US citizenship. Bigg Boss 10 winner Manveer Gurjar's marital status came to light after the season ended.

(The above story first appeared on LatestLY on Oct 04, 2020 11:08 PM IST. For more news and updates on politics, world, sports, entertainment and lifestyle, log on to our website latestly.com).