Bigg Boss 14s Tuesday (Oct 20) episode saw something which we never witnessed in the history of the reality show. From Sidharth Shukla’s team breaking rules in the most crucial task of the season to mentors Hina Khan and Gauahar Khan teaming up against Sid, the house was on fire literally. Check it out. 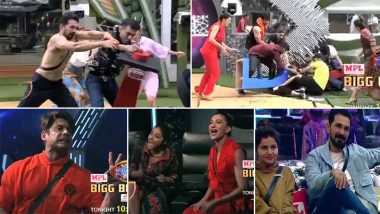 Bigg Boss 14s Tuesday (Oct 20) episode saw something which we never witnessed in the history of the reality show. From Sidharth Shukla’s team breaking rules in the most crucial task of the season to mentors Hina Khan and Gauahar Khan teaming up against Sid, the house was on fire literally. That’s not it, as it was not just an argument between the toofani seniors but it was kind of an ugly spat between them. Gauahar also was seen as challenging Bigg Boss over the whole chaos. In case you have missed tonight’s full-on dhamaal filled episode, fret not, as we’ve got you covered. Bigg Boss 14 Somvaar Ka Vaar October 19: Nikki Tamboli Chooses Sidharth Shukla As Her Mentor, Rubina Dilaik-Abhinav Shukla Pick Hina Khan - 5 Highlights of BB 14.

First things first, the inmates inside the bedroom area discuss the daily chores. They all talk about the dishwashing duty, where Rahul Vaidya tells that he has a lower back issue and so cannot continue with the work. Every teammate denies doing bartan and Vaidya also is in no mood to continue. Jasmin accuses Rahul of lying about his medical condition. Finally, after the chaos, the singer decides that he will do breakfast ke bartan along with his other duty.

Rubina Dilaik Has A Problem With Salman Khan

Bigg Boss calls Rubina inside the confession room and tells her to vent out. The Shakti actress conveys it to BB that she has not liked how her husband Abhinav Shukla was tagged as a 'saman' (luggage) by Salman Khan on Weekend Ka Vaar. While talking about it she also breaks down and says she finds it derogatory. Further, she also decides to quit the show as she feels disrespected on the national TV, but later she adjusts.

Bigg Boss introduces a new task for the freshers. And as the house is already divided into Hina, Gauahar and Sidharth’s team, the task was that each team needs to save their buzzer from the opponent. The team who loses the task will be kicked out of the house along with their mentor. P.S: only two members from each team can attack the opponent. Bigg Boss 14 Weekend Ka Vaar October 18: From Salman Khan's Lecture To Rubina Dilaik to Shehzad Deol, Abhinav Shukla and Jaan Kumar Sanu in Bottom 3 - 5 Highlights of BB14.

As the task starts, we see Sid’s team attacking Gauahar's team with an aim to press the buzzer. This leads to a fight among the inmates and it really gets ugly. However, the problem here was the uneven proportion - Gauahar’s two players vs Shukla’s three, which was wrong as per the guidelines. This stunt by Sidharth’s team (Eijaz Khan, Pavitra Punia and Nikki Tamboli) irks Gauahar and she screams at Bigg Boss for justice.

We expected this sooner or later. And ahead, we see the three mentors discussing in private about the task. Amid this, Hina and Gauahar put forth a strong opinion that Sid’s team broke the rules and so should be shown the exit door. However, Shukla does not agree with the two girls and we see him tagging his team as the clear winner. This makes Hina and Gauahar mad and the two seniors team up to eliminate Shukla and team from the game.

That's it, guys! After analysing today's episode, we feel Sidharth Shukla and team were definitely not right during the task. Well, the decision with regards to the same is still pending and we wonder what will be the fate of Shukla's team. Stay tuned!

(The above story first appeared on LatestLY on Oct 21, 2020 12:09 AM IST. For more news and updates on politics, world, sports, entertainment and lifestyle, log on to our website latestly.com).