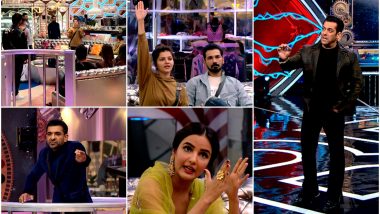 Bigg Boss 14 is back with yet another Weekend Ka Vaar episode, which make for the best episodes of the week. Salman Khan comes on stage and announces that he will be bringing the WKV this week on Sunday and Monday. He highlights how freshers have come out in their game, Rubina is in full form and also how Rahul and Jasmin shone with their performances this week. Bigg Boss 14 Weekend Ka Vaar Synopsis: Rubina Dilaik and Salman Khan at Odds, This Weekend's Elimination In the Hands Of Freshers.

Rubina Refuses To Be a Part of A Task

Rubina Dilaik declares that she will not do a task given by Bigg Boss where housemates have to pick who amongst Rubina and Nikki have more garbage in their minds. She also raises a point stating that since she doesn't have enough clothes to wear during the Weekend Ka Vaar episode, she'll not be a part of it. Bigg Boss 14 October 17 Episode: Rahul and Jaan's Sing-Off, Hina Calls Rubina a Winner - 5 Highlights of BB 14.

Salman gets to lecture Rubina about her attitude in the house. He gives her an earful for questioning Bigg Boss and the show rules. Berating Rubina for not doing the 'mind mein kachra' task, Salman tells Rubina that the task was designed to get forth things that were said about her behind her back. Salman tells her that her points are unacceptable and don't make sense at all. Things smoothen out and Rubina ends up doing the task. She also ends up getting the most votes.

Salman also appreciates Jasmin for being her real self in the house and not acting. She then tells Salman that she rather prove her point to Nikki by performing and not abusing and creating scenes like Nikki does. Salman applauds Jasmin for conducting herself very well in the house and asks her to continue the way she is. Salman also applauds Rahul for his game this week.

Eijaz asks Rubina to step into the kathghara and accuses her of having personal problems with him. Rubina tells Eijaz that she does not like his dual-personality. She also accuses Eijaz of telling Abhinav during the farm task of lifting Pavitra's top. Rubina next accuses Pavitra of misunderstanding and talking between her and her husband Abhinav. Rubina next calls Rahul and tells her she does not agree with his reasons for which he called her kachra. Jasmin calls on Eijaz and accuses him of crossing the line and being intimidating while doing the task. Eijaz justifies himself by saying that that was his psychological tactic to win the task.

Salman Khan announces that Shehzad Deol, Abhinav Shukla and Jaan Kumar Sanu are in the bottom three, which obviously means that Rubina and Jasmin have secured the highest number of votes. He also drops the bomb that the elimination will be decided by freshers.

Well, now that was one explosive Weekend Ka Vaar literally. In Monday's Weekend Ka Var we'll see the game literally paltofy with the three seniors Hina Khan, Gauahar Khan and Sidharth Shukla forming their teams and the remaining freshers chose a senior team. Also, the freshers will pick one of the bottom 3 contestants - Shehzad Deol, Abhinav Shukla and Jaan Kumar Sanu to get eliminated.

(The above story first appeared on LatestLY on Oct 18, 2020 10:58 PM IST. For more news and updates on politics, world, sports, entertainment and lifestyle, log on to our website latestly.com).