Dark Season 3 Review: A Fitting Finale That Could Crown This Netflix Series as the Best Sci-Fi Show of the Decade! 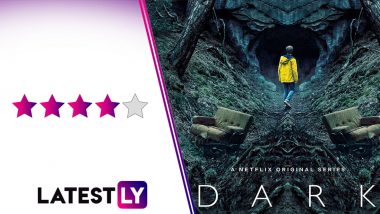 Dark Season 3 Review: The fan-favourite German series returns with its twisted time travel and even more twisted time-travel paradoxes for what is its final season. It's really great that the makers of Dark, Baran bo Odar and Jantje Friese, haven't gone greedy and stretched the show before it starts testing the fans' patience (ahem....ahem Lost!). And it also has to be complimented that they don't even rush into things just to make the show shorter (ahem...ahem... Game of Thrones!). And yup, there is a reason why it only has 'three' seasons. Dark Season 3: Netizens Share Funny Memes and Jokes About the Netflix Show Being a Brain Teaser They Can't Figure Out!

The final season of Dark isn't without its big gaps and plot-holes, but it is enjoyable overall. Not to mention, a technical marvel too. (Trying to avoid maximum SPOILERS in the review, but there are some I can't help but mention here)

As we saw at the end of the last season, despite the young Jonas' (Louis Hofmann) efforts, the apocalypse has come for Winden. He also loses his love Martha (Lisa Vicari) at the hands of Adam (Dietrich Hollinderbäumer), his scarred future self. Jonas is surprised by the appearance of another Martha, with bangs and all, who reveals that she is from an alternative dimension and she knows how to save his Martha.

This Martha takes Jonas to her dimension with a special device, before abandoning him there. This Winden is different from Jonas' world. It goes through the same time anomalies as from where Jonas came from and is about to suffer the same fate, but things aren't the same. Dark Season 3: Forgot What Happened in The Previous Seasons? Netflix Stokes Your Memory With the 'Ultimate Dark Recap' (Watch Video).

Here, Martha is living in his house, with her mother Katharina (Jördis Triebel), elder brother Magnus (Moritz Jahn) and younger brother Mikkel (Daan Lennard Liebrenz). Their father Ulrich Nielsen (Oliver Masucci) is divorced from their mother and is married to Hannah (Maja Schöne). He is the police chief of Winden instead of Charlotte Doppler (Karoline Eichhorn), with whom he is having an affair. There are other character changes too, though most retain the same personality.

The biggest change for Jonas is that he isn't born in this world, for Mikkel hadn't time-travelled here. Instead it is Martha who goes through similar experiences as Jonas, and now he has to be a catalyst to how the fate of this Winden turns out.

But the third season isn't just about this alternative world, whose existence means someone has altered with the time-loop in the original timeline. We also get to see what happened in the original dimension, with Hannah travelling to 1953 and carrying an affair with Egon Tiedemann (Sebastian Hülk). Katharina is in 1987, searching for her son and her husband. The adult Jonas (Andreas Pietschmann) has inadvertently made Magnus, Franziska (Carina Wiese) and Bartosz (Paul Lux) travel to 1888 and is now trying to figure out how to time travel back. Meanwhile, we also get to see the survivors of the apocalypse, like Elisabeth (Carlotta von Falkenhayn) and her father (Stephan Kampwirth), trying to keep themselves alive in the new harsh world.

Can Jonas and Alt-Martha put a stop to their worlds' collapse? Or like we figured out in the last season - will their every action itself become a part of the loop, and they aren't trying to break it at all? What's Adam's ultimate purpose? Or for the matter, Eve (Barbara Nüsse), who seems to be the puppeteer in the new dimension? Will we see the end to the beginning or the beginning to this end? All these and more questions get answered in the eight episodes of the final seasons, though not exactly in the way you expect.

There is a whole lot to process in the final season, especially now we have to keep a track on two parallel worlds. Thankfully, whenever the narrative shifts to a parallel world, there is an editing effect that looks like we are sucked out of a wormhole. Still, you have to keep your eyes and ears glued to everything that's happening, everything that's spoken. For one missed scene or missed dialogue has the potential to make you lose track of what may happen next in that event or with that character. Dark Season 3 First Reviews Out: Critics Tag it as One of the Best Finales You Can Have For a Show.

The relationships in Dark continue to go twisted; the four main families of Nielsens, Kahnwalds, Dopplers and Tiedemanns find their histories more entangled with each other. And yes, even turning (accidental) incestuous. While plotting the family tree is what makes the show so much fun, in the new season, it also leads to a slack in pacing, especially in the middle episodes. Though, I loved the turn Dark takes with using the family tree in the final episode.

Also don't expect every question of yours to be answered, as the series leaves with a few gaping holes in your understanding. At times, you get the feeling that the writers are painting themselves in the corner by indulging in every wacky time travel paradox theory. After all, there is a limit of indulging in bootstrap paradoxes (Google it please!). Or is it?

Watch the Trailer of Dark Season 3:

These flaws are something you can ignore, because what the writers and the directors have done here are nothing short of a miracle. They make sure that every chess move on the three-dimensional board makes its effect felt either at that moment, or somewhere else. It is amazing to see how a show can be this arresting, without a primary baddie. Just flawed characters making flawed decisions to either save themselves or their kin and end up damaging their own fates. Every character, major or minor, have a defining journey that makes them memorably distinct, even if Dark doesn't do justice to all. Dark Season 3 Ending Explained: Breakdown of Jonas, Martha, Adam, Eve and Winden’s Fates in the Final Episode of the Netflix Show (SPOILER ALERT).

The decision to put more focus on Martha than Jonas also brings a refreshing change, for it is always good to see the twisted happenings through the eyes' of a rookie. Jonas is now somewhat a veteran, though he is still a mere pawn in whatever game Adam and Eve are playing between themselves. And his eventual decaying into Adam makes so much sense.

Making Time both the hero and the villain in the same story brings a lot of crazy repercussions, and the creators manages to create a spell-binding clash of timelines and dimensions, that will continue to keep fans busy in discussions for years. Hats off to the entire team, including a wonderful set of actors, who do complete justice to their roles.

Even in the technical aspects, Dark continues to impress. The set designs are immaculate, from the houses that match the era we see them to the two diametrically-opposite post-apocalyptic worlds. Nikolaus Summerer's cinematography doesn't put one frame wrong when it come to tone or palette, with some wonderful tight frames and overhead shots. Same amount of praise should go to Ben Frost's score, that gives Dark its brooding personality. Also, like with the previous seasons, there are some amazing choice of songs used.

So how does Dark end? Without putting any spoilers, I can say that leaves you with mixed feelings. But in a nice way, not like Game of Thrones. A show like Dark can never end on a fan-pleasing note but it doesn't disappoint either, as it does best to plug up the holes and make sense in that. Which is what makes this is perhaps one of the better final seasons of this century.

- The Making and The Writing

- Lag In The Middle

What can you say about a show that keeps messing with your head and yet you want it to continue do that for your mental orgasms? Dark is by far the best sci-fi series that we have seen in the past decade, with a finale that brings it to a glorious close. The final season comes with its inherent problems, but it is a masterpiece in terms of writing and visual appeal. All of three seasons, the final season of Dark has started streaming on Netflix from June 27.

(The above story first appeared on LatestLY on Jun 27, 2020 10:35 PM IST. For more news and updates on politics, world, sports, entertainment and lifestyle, log on to our website latestly.com).