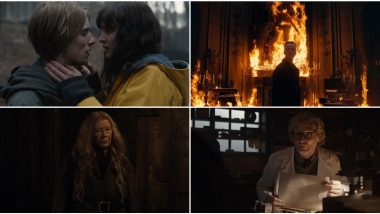 Dark Season 3 Ending Explained: A Breakdown of What Happened In the Final Episode (Photo Credit: Netflix)

There are some movies and shows that leave you numb, but in a good way. Remember the feeling you have when you watched Thanos smile at the sunset in Avengers: Infinity War? It is something similar that I felt when the final season of Dark ended. You have every reason to correct me if I am wrong, but Dark has turned out to be the best sci-fi series I have seen in the wake of the 21st century. The German series is created by Baran bo Odar and Jantje Friese and is based on time travel paradoxes that plague a small German town, resulting in world apocalypse. Dark Season 3 Review: A Fitting Finale That Could Crown This Netflix Series as the Best Sci-Fi Show of the Decade!

As you can see from the headline, we are explaining what happened in the final episode of the third season. So if you haven't watched the season or the show yet (buddy, what the heck are you waiting for?), then please return here after doing so. For there are plenty of SPOILERS here. And though this writer has a very naive understanding of quantum physics and time-travel logic, I will explain by what the show tries to tell me, instead of offering my own expertise here. So let's get started - 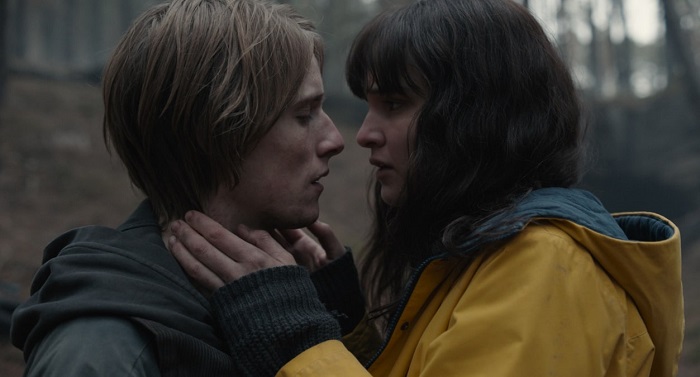 The third season begins with Martha from an alternative world rescuing Jonas from his and bringing to her world, asking him to save it. In this alternative reality, Jonas doesn't exist, because Mikkel hasn't time-travelled. But this reality suffers from the same time anomalies and is about to face the same apocalypse as his. As the season furthers, we find out that both Jonas and Martha are being played by their future selves, Adam and Eve respectively. Their playing against each other in order to save their own worlds is what keeps the time loop intact, though they don't know that yet. Dark Season 3: Netizens Share Funny Memes and Jokes About the Netflix Show Being a Brain Teaser They Can&#8217;t Figure Out!

Glitch in the Matrix 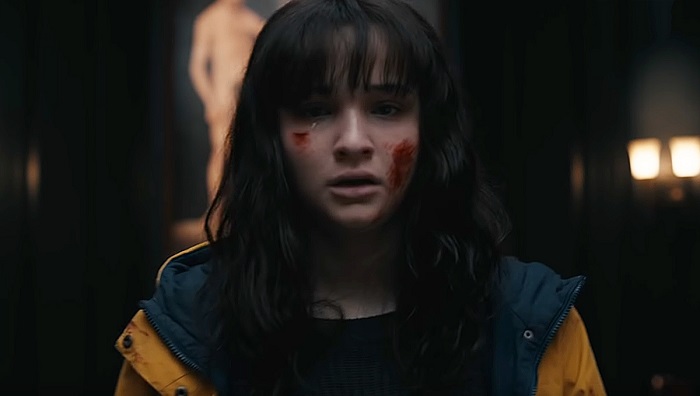 Jonas keeps saying to alt-Martha that his presence in her reality is a glitch in the matrix. In fact, both their existences are a glitch in the matrix. In order to save each other and their own worlds, they end up repeating the same time loop for infinite times. Adam has killed Martha twice in the duration of the show, while Eve convinces alt-Martha to shoot down Jonas. They think they are bringing changes to the loop, only they aren't. Till one person made them realise they are looking at it all wrong, and there is a loophole in the loop that can help them destroy it forever. And that person is... 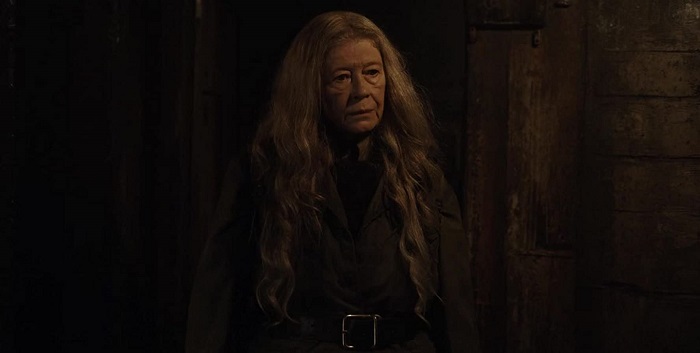 The Elder Claudia in Dark

After destroying the God Particle along with a pregnant Martha (whose womb allegedly has the origin), Adam thinks he has broken the loop. But it doesn't work. At that time, the elderly Claudia arrives and Adam is shocked to see her, after having ordered Noah to shoot her down, which we saw last season. Claudia informs Adam that she has been lying to both him and Eve all this time; she was destroying the realities where her daughter Regina is dying of cancer and she has found out the origin of all their troubles. 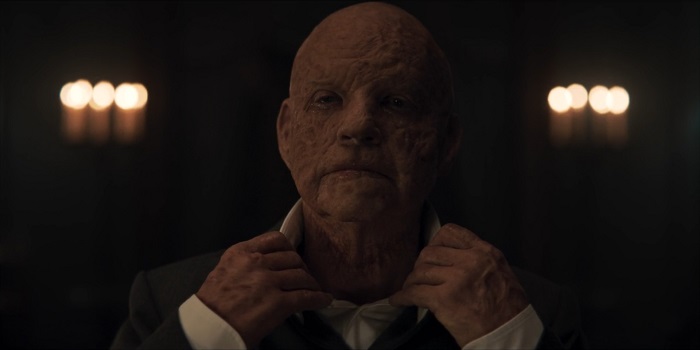 Claudia informs Adam that the nuclear explosion at the factor has created a glitch in time, where it stands still for a brief moment. Eve has been using it to manipulate Adam's plans, but Claudia now has a way to use that to alter the loop. She convinces Adam to return to the moment where he kills Martha at Jonas' house, and take Jonas to alt-Martha's reality. Adam does that and he convinces Jonas to take alt-Martha to the 'origin'.

Meanwhile he pays a visit to Eve, destroying the Adam and Eve paintings in her room. In other realities, Adam shoots down Eve when he realises she has tampered with his plans, just continuing the loop. However, this time, his gun has no bullets, proving that by sending Jonas and Martha to the 'origin', he has changed the loop. 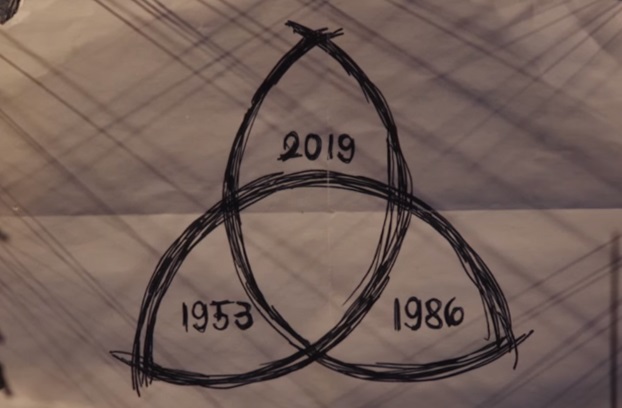 The triquetra of timelines in Dark

Before we get into the origin, let's discuss the importance of number three. There is no coincidence that Dark only has three seasons; it was always meant to be. In Christianity (Dark is high on Biblical references), 333 is meant to be the sign of angels, just like 666 is for the devil. Throughout Dark, we see this symbol of triquetra - a symmetrical triangular figure of three interlaced arcs. Like the three main years where the wormhole cause troubles - 2019, 1986 and 1953, each separated by 33 years. We also see Jonas and Martha's future son in three age-versions (though the reason to have three of them isn't very clear).

While we were always under the impression that Jonas' reality was the real one, and Martha's an offshoot, that isn't true. They are both parallel realities that are caused by an anomaly in an original timeline. Thus adhering to the show's 'triple' obsession by having three timelines. 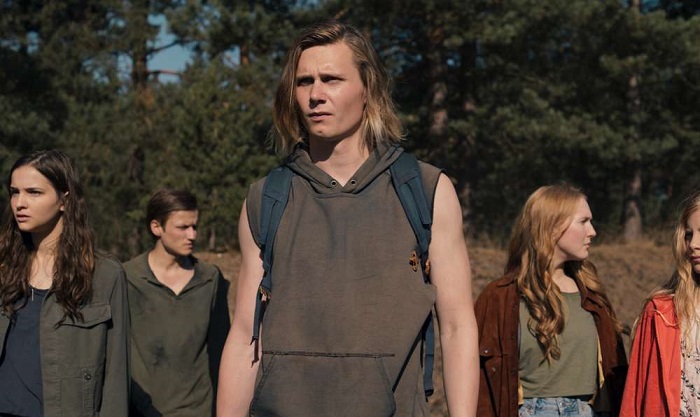 A Still From Dark

In the final season, we hear characters following Adam or Eve talking about 'Paradise' - a world where the apocalypse never happened and all had happy lives. This Paradise is later found out to be the the original timeline, that got split into two. So who destroyed this paradise? He is the man who actually talked a lot about time, but who you least expected to do so. 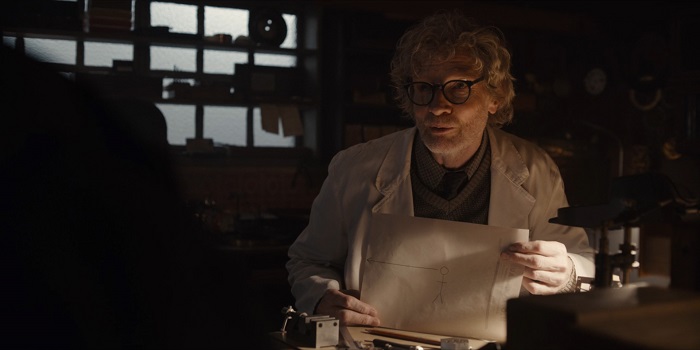 The clockmaker may never have been part of the family circus in Dark, though he was a surrogate guardian to the time-travelled Charlotte as a baby. So who expected this unassuming man to be the key to all the troubles, even though he had unintentionally caused them all? We know that Tanahaus (is it coincidental that his name sounds similar to a certain Thanos?) had lost his son, daughter-in-law and grandkid in a car-accident. Earlier in the season, we hear him explaining about Schrodinger's Cat. Using the Schrodinger's Cat principles, he tries to create a wormhole to travel back to the time when his family was alive. Instead, the process presumably collapses his timeline and creates two others, just making an infinite loop and the many bootstrap paradoxes. 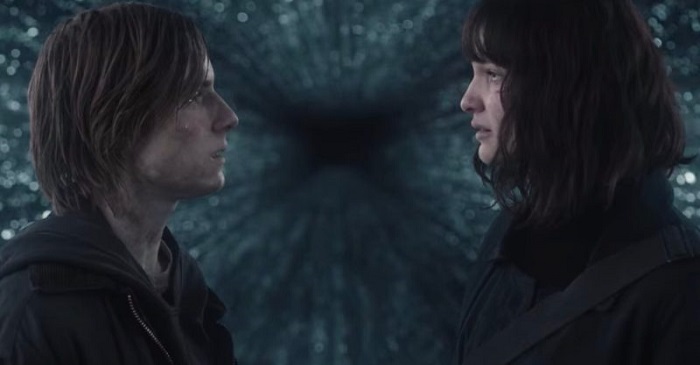 Martha and Jonas return to 1986 in the original timeline using Eve's time-and-reality jumping device. They get into the cave and wait for the moment, when Tanahaus creates the wormhole. As they enter a space-time limbo, Jonas and Martha see the other's childhood versions sensing their presence respectively, thus making them 'made-for-each-other' indeed. They then travel back to the night when Tanahaus's family gets killed, after his son had a quarrel with him. They prevent the accident from happening and convinces Tanahaus's son to return to his father.

With his family returning to him, there was no need for Tanahaus to make his wormhole device, thus negating the eventuality of timelines getting split. As I mentioned earlier, Martha and Jonas shouldn't have existed in this timeline (more on this ahead), so they get obliterated, as they hold hands and Jonas telling Martha that they are perfect for each other. Similarly, Adam and Eve also get obliterated together, while adult Jonas and adult alt-Martha, both loners, do so separately. 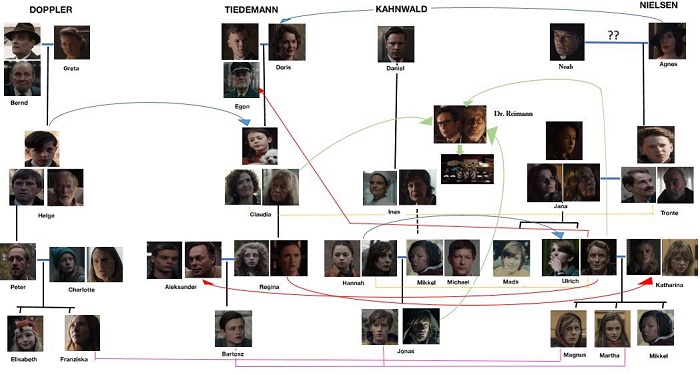 A Fan's Drawing of the Family Tree in Dark from Twitter

Plotting the twisted family tree of the Kahnwalds, the Nielsens, the Dopplers, and the Tiedemanns was one of the most fun parts of analysing Dark as a series. Well, the finale gives that a big FU, as along with Jonas, Martha and their alter-egos, even the family tree gets destroyed.

What Does That Mean? 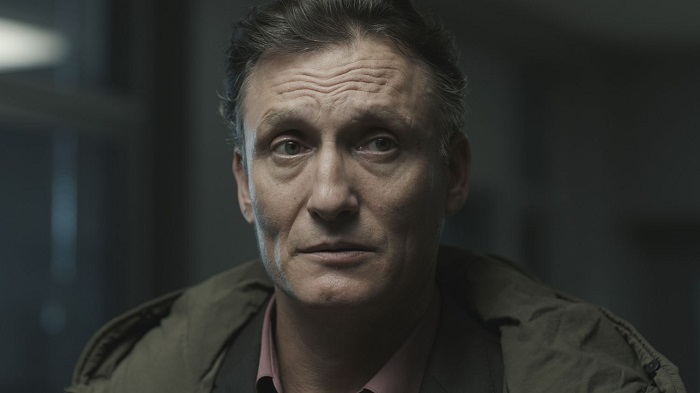 It means that since Tanahaus didn't create the wormhole that made Mikkel time-travel to 1986, it basically ends the domino effect there and then. So this stops the many bootstrap paradoxes created by characters travelling back and forth in time and procreating there, and creating all incestual anomalies. So characters like Ulrich, Magnus, Mikkel, Tronte, Franziska, Elisabeth, Bartosz, Aleksander, Charlotte, along with Jonas and Martha, do not exist now, because they have all been products of time-travelling shenanigans. This also means that Tiedemanns' power plant also doesn't exist, thus averting the nuclear apocalypse in the original timeline. 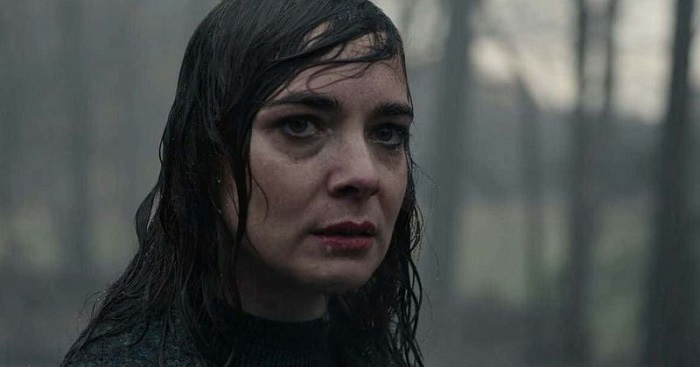 So who remains in this supposedly happy timeline, if we have lost most of our fan-favourite characters? The final scene shows a happy group of friends and partners at a dinner table, who weren't so friendly in the other timelines. This consists of Katharina, Hannah, Woller, Regina, Peter and Anton Rubtsov. Woller has both his eye (lost in Jonas' timeline, merely scarred here) and hand (lost in Martha's timeline) intact, and he is surprisingly married to Hannah, who is expecting. Both Katharina and Regina are seemingly single, while Peter is dating Benni.

Why is This A Happy Ending? 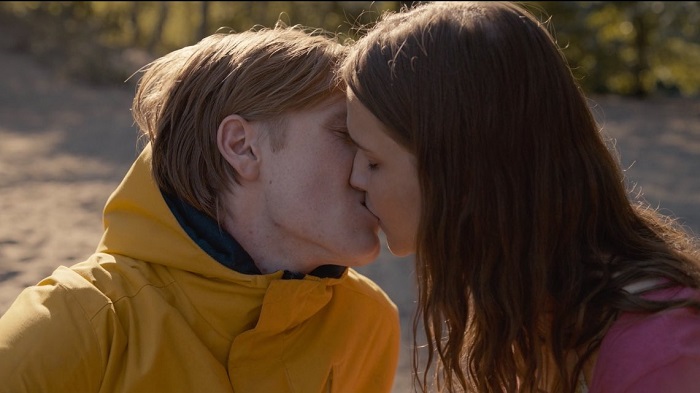 Well, the show doesn't opt for a conventional happy ending, because for that, Jonas and Martha had to be alive, and that means the loop is intact, which also means that they don't get a happy ending. Get it? This isn't Avengers: Endgame, and there too, we had to contend with the losses of Black Widow and Iron Man for a 'happy' ending. Dark may not give the happy ending the romantic in you wanted, but it gives the best possible happy ending among the infinite scenarios the narrative created.

From Dark Comes The Light 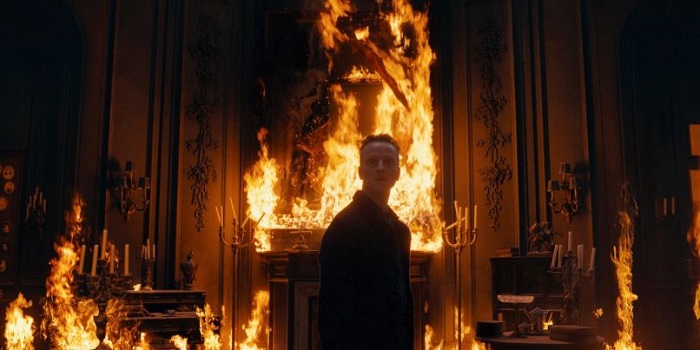 A Still from Dark

Earlier in the season, Adam and Eve are often referred to as Dark and Light, though their actions often get those terms frequently interchanged for themselves. The real Dark to Light moment comes at the very end. As the group of surviving friends converse over the table and mention how Winden should never exist (If only they knew!), the light goes out for a moment. The pregnant Hannah happens to glance at a yellow raincoat lying on a chair, and suddenly becomes serious.

She tells them of a dream she had where she relived this very moment and how the world ended after that, but it felt so peaceful and happy. Why others scoffed at her revelation and even Hannah dismisses it as her pregnancy hormones, we know the truth. She is having a sense of deja vu where she experienced the multiple realities even if it was for a brief moment. The light returns and the table becomes happy again, making this show's way of telling it has stepped out of the 'Dark' and into the 'Light'. 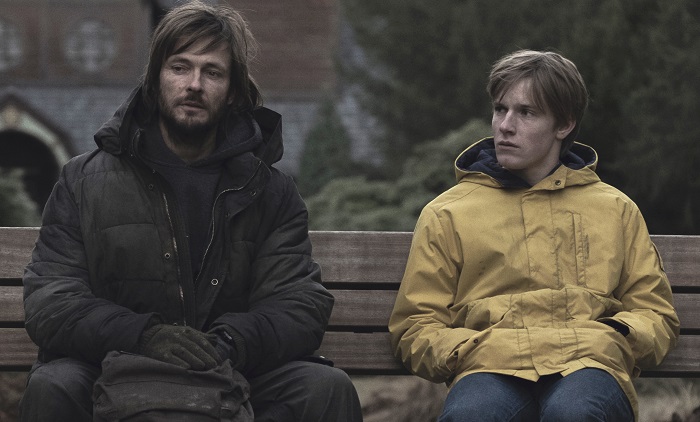 The Two Versions of Jonases from Dark Season 1

When Hannah is asked what's the name she is thinking of giving her baby, she thinks for a moment and tells 'Jonas' is a name she is considering. No doubt, it is the result of the deja vu feeling that she has been having. And Jonas will arrive in their timeline. But it won't be the Jonas we have loved and cared for in the past two seasons. This will be another person from the same mother but of a different father.

Did we miss out on any other explanations that the Dark finale had in it? Do share your thoughts in the comments section below.

(The above story first appeared on LatestLY on Jun 28, 2020 06:16 AM IST. For more news and updates on politics, world, sports, entertainment and lifestyle, log on to our website latestly.com).